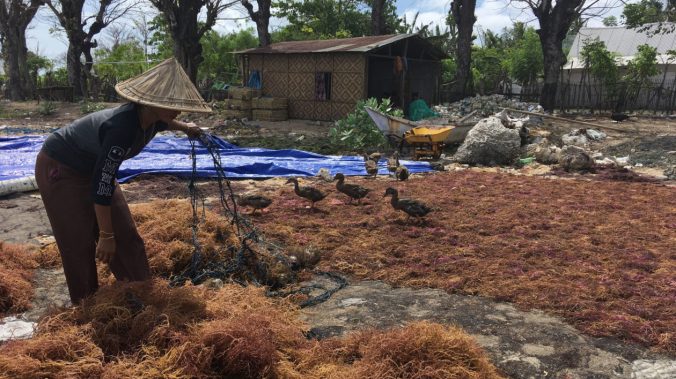 The subject of seaweed farming, which we sometimes refer to as kelp farming, is of keen interest to us because of the relationship to conservation; our thanks to Tiffany Waters at Cool Green Science:

Seaweed Farming: A Gateway to Conservation and Empowerment

“What does your husband do while you’re working on the seaweed lines?”, we ask. She laughs and says in Bahasa, “He does the cooking and the cleaning.”

It’s day 6 of our field visit to Indonesia and we’re in Takalar visiting our fifth island and third seaweed farm of the trip. On the brink of the ‘extreme season,’ stifling hot is an understatement, but the light breeze from the Flores Sea provides a welcome break from the three flights and 2-hour van trip that brought us here.

Seaweed farming is one arm of the massive and growing aquaculture industry in Indonesia, representing 37% of the world’s seaweed production, producing over 10 million tons annually.

Seaweed is a globally-traded commodity for used for carrageenan (a thickening ingredient in common food products and cosmetics), direct consumption, and may even have value for other purposes like sustainable animal feeds. It’s an incredibly important industry in Indonesia for rural, indigenous, and – as confirmed by our visit to South Sulawesi – women. World Bank analysis even shows that expanding seaweed farming in tropical areas like Indonesia may further boost local incomes, food security, and environmental health.

As compared to many other farming practices, seaweed is seen by some as the pinnacle of sustainable aquaculture, requiring no feed other than sunlight and marine nutrients, holding the ability to remove excess nutrients from eutrophic areas, and even mitigating the effects of ocean acidification.

Seaweed requires no freshwater to grow, which is particularly important for remote islands in Indonesia where the ability to raise traditional crops is limited and climate change projections include increasing temperatures and prolonged dry seasons.

Seaweed farming can also serve as an important alternate livelihood to more destructive practices, such as the unfortunately common ‘blast fishing’ where fishermen use explosives or poison to stun or kill fish, decimating corals and other habitats in the process. The Indonesian Navy has even heralded seaweed farming as an alternative livelihood to piracy, training ex-pirates how to farm with the intent of keeping them from returning to a life of crime.

However, like most issues – the reality and environmental chain impacts are incredibly complex. Seaweed farming can also compete with other marine uses and cause severe environmental degradation, with many farmers removing seagrasses, digging up coral reefs, and even cutting down mangroves for use as wooden stakes…