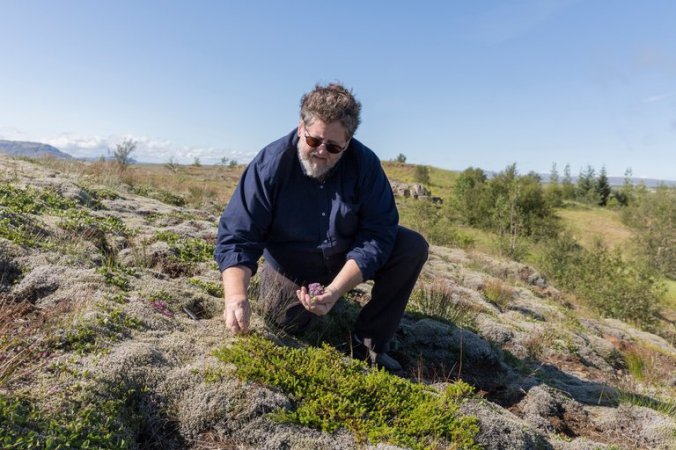 Thanks to Peter Kaminsky, who helps answer the question Why Cook Over an Icelandic Geyser? and does so with gusto:

REYKHOLT, Iceland — Standing in the mud of the Myvatn geyser field in northern Iceland, Kolla Ivarsdottir lifted the lid of her makeshift bread oven. It had been fashioned from the drum of an old washing machine and buried in the geothermally heated earth. All around us mudpots burbled and columns of steam shot skyward, powered by the heat of nascent volcanoes. 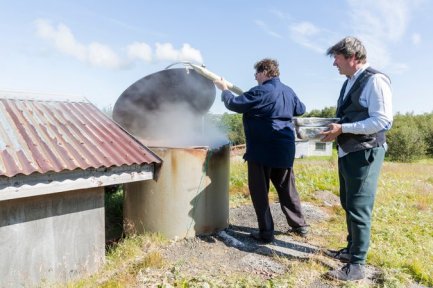 Ms. Ivarsdottir, a mother of three who sells her bread in a local crafts market, reached into the oven and retrieved a milk carton full of just-baked lava bread, a sweet, dense rye bread that has been made in the hot earth here for centuries. She cut the still-hot loaf into thick slices. It is best eaten, she said, “completely covered by a slab of cold butter as thick as your hand, and a slice of smoked salmon, just as thick.” We settled for bread and butter — still a supernal combination.

“Do many people cook other things this way?” I asked, eyeing the natural heat sources all around me.

“Not much,” she replied. “Sometimes a goose that a hunter shot, but most often, just the lava bread.”

I found this surprising in an energy-rich and conservation-minded country that is also a pioneer in modern Nordic cuisine. In this era of slow cookers and sous-vide, wouldn’t it be possible, I wondered, to make a whole meal using Iceland’s natural geothermal ovens?

I did more than wonder: I decided to test my proposition, a quest that led me last summer on a wide-ranging tour of this island’s culinary riches.

A call to the restaurant critic and fish exporter Kjartan Olafsson, my go-to source for all things Icelandic, caught him in the midst of haying for the horses that carry him and his wife on off-road forays into the wilderness. In this land of rapid weather changes and not much arable land, the folk wisdom of making hay while the sun shines is a deeply held article of faith.

At his suggestion, I immediately set out on an eight-hour drive to Reykholt, a village in the southwest. Although it has the some of grandest scenery on earth, Iceland is a small country; 16 hours by car will take you on a complete circuit…