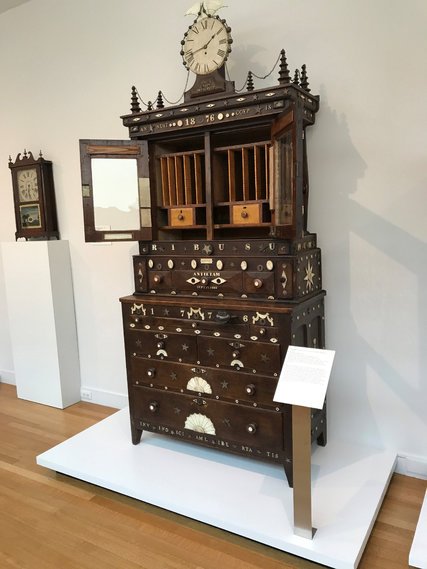 The elaborately detailed Bingham secretary enjoyed pride of place at the Wadsworth Atheneum in Hartford until it was determined to be a forgery. Credit John Banks

The principle of the matter, depending on how you look at it, makes this story interesting. The idea that a person can craft new wood into historical storylines so compellingly that experts cannot detect the recency of the crafting? Wow. Fooling a buyer into paying a premium for the historical significance? Uh, no. Thanks to John Banks for this sleuth story:

The Civil War memorial secretary was widely embraced as a folk art treasure. Fashioned from walnut, maple and oak, it was said to have been created circa 1876 to honor John Bingham, a Union infantryman who had fallen at Antietam. 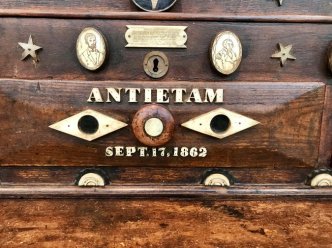 A detail of the secretary, with the barnyard-bone lettering. CreditJohn Banks

Profusely adorned, it featured a music box that played “Yankee Doodle” and it was accompanied by a letter from a Bingham descendant, describing the significance of the piece to the family.“I was astonished by it,” said Wes Cowan, an auctioneer and dealer who examined the secretary at the Winter Antiques Show in New York in 2015.

The owner, Allan Katz, had bought it months earlier from a Massachusetts dealer for an undisclosed price, and was now trying to sell it for $375,000.

“Clearly,” Mr. Katz, a Connecticut antiques dealer, said in a video filmed at the show, “we are hoping that it might go to an institution, because it really would be wonderful to share this with the public on a day-to-day basis.”

So it was gratifying, Mr. Katz said in an interview, when the Wadsworth Atheneum in Hartford purchased the work and gave it prominent display.

In recent weeks, though, the museum has had to acknowledge that the carefully crafted secretary with the compelling story is actually an exquisite fake. And the forger has now come forward, not only to acknowledge and apologize for his sin, but also to bask a bit in how artful his deception has been.“It’s the apotheosis of my own making,” the forger, Harold Gordon, said in a recent interview. Mr. Gordon sold the piece to Mr. Katz, and in the process fooled many experts in the antiques world.

Fake antiques are far from rare, but few match the sort of ambitions and artistry as that created by Mr. Gordon, experts said. Robert Cheney, director of the Willard House & Clock Museum in North Grafton, Mass., likened this caper to that of the “great Brewster chair,” created in 1969 by a former police officer who passed it off as a rare, 350-year-old piece. It ended up in the Henry Ford Museum in Michigan.

Occasionally, museums display fakes intentionally. One of the most popular recent exhibitions at the Winterthur in Delaware was devoted to forgeries, according to Linda Eaton, co-curator of the display. It opened, appropriately, last April Fools’ Day.

Mr. Gordon said he had no grand plan for trickery when he set out around 2010 to create his phony memorial in the workshop of his home in Templeton, about an hour outside Boston. A self-taught woodworker, he labored off and on for months as he turned a plain-looking, if old, secretary into a detailed piece rich with the patina of history.

Mr. Gordon, a stickler for details, said he tried to imagine how a simple, rural country craftsman in the mid-19th century would have approached such a project. “What standards of excellence did they have?” he asked himself.

Among his additions: a clock crowned by an eagle and the words “The Union Preserved” near the base.

But to make it work, he said he knew it would need a story. So Mr. Gordon, a student of history, imagined the piece as an heirloom of the Binghams, a real family with Civil War ancestors…