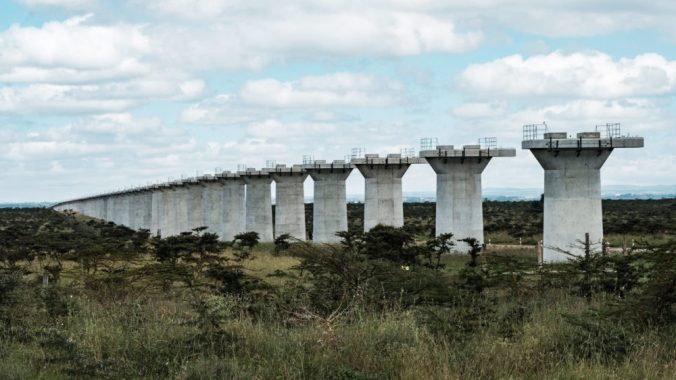 Thanks to William Laurance for this informative opinion essay that gives a bit of hope for wilderness preservation:

Is the Global Era of Massive Infrastructure Projects Coming to an End?

The world’s wild places have been badly carved up by decades of roadbuilding, dam construction, energy exploitation, and other megaprojects. Now, as the financial community, environmental groups, and local citizens increasingly oppose big infrastructure development, the tide of environmental destruction may be turning.

Malaysia’s former Prime Minster Najib Razak, third from left, looks at a model of the China-backed East Coast Rail Link in 2017. Malaysia has since canceled the project due to mounting costs. AP PHOTO

We are living in the most explosive era of infrastructure expansion in human history. To meet the United Nations’ development goals, we would need to invest tens of trillions of dollars in new roads, railways, energy ventures, ports, and other projects by 2030 — dramatically amplifying an infrastructure tsunami that is already shattering the world’s biologically richest ecosystems. But this great wave of infrastructure development is suddenly looking shaky — and it might just be the best outcome for nature and humanity alike.

The most striking sign of an infrastructure slowdown is Malaysia’s stunning decision to cancel its massive high-speed railway from Kuala Lumpur to Singapore, plus another $22 billion in other railway and oil pipeline projects.These are core elements of China’s $8 trillion Belt and Road Initiative, which comprises some 7,000 infrastructure and extractive industry projects that will span at least 70 nations, stretching from China to the South Pacific and across much of Asia, Europe, and Africa.

Malaysia’s decision — based on frustrations over its growing burden of borrowing from Chinese lenders to pay Chinese corporations and Chinese employees to construct the railway — comes at a pivotal moment. The Chinese economy is slowing and increasingly mired in debt, and many China-led projects are stalling. International investors that were in a veritable feeding frenzy over infrastructure now seem to be having second thoughts. And it’s not just the Belt and Road that is looking vulnerable. Other world-changing schemes, such as Africa’s massive “development corridors” — several dozen major road, railroad, and energy projects — and the Initiative for the Integration of Regional Infrastructure in South America, are hitting major roadblocks, too…