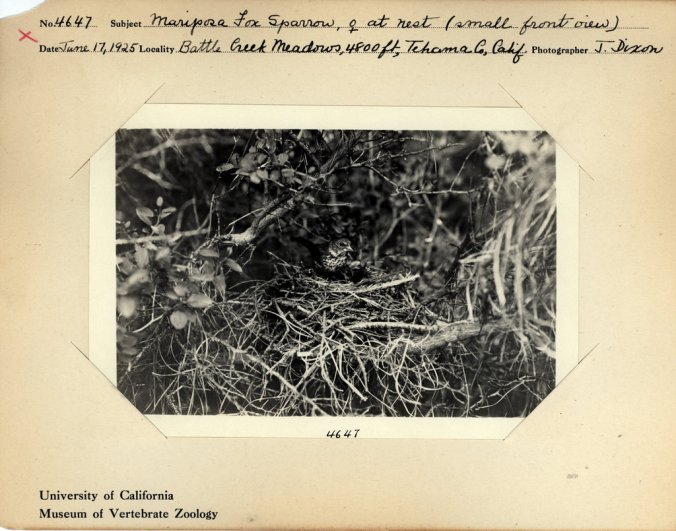 A Mariposa fox sparrow in its nest in 1925, observed during Dr. Joseph Grinnell’s surveys of California fauna. Credit Museum of Vertebrate Zoology, University of California, Berkeley

Retracing the steps of a century-old wildlife survey, ecologists find that birds are making remarkable adaptations to climate change.

Ultimately Grinnell, founding director of the Museum of Vertebrate Zoology at the University of California, Berkeley, and his colleagues produced one of the richest ecological records in the world: 74,000 pages of meticulously detailed field notes, recording the numbers, habits and habitats of all vertebrate species that the team encountered.

In 2003, museum scientists decided to retrace Grinnell’s steps throughout the state to learn what changes a century had wrought. And that’s why Morgan Tingley, then an ecology graduate student at the university, found himself trekking through the Sierra for four summers.

Dr. Tingley wanted to know how birds had fared since Grinnell last took a census. Years later, the answer turned out to be a bit of a shock.

Of 32,000 birds recorded in California mountain ranges in the old and new surveys — from thumb-sized Calliope hummingbirds to the spectacular pileated woodpecker — Dr. Tingley and his colleagues discovered that most species now nest about a week earlier than they did 70 to 100 years ago.

That slight advance in timing translates into nesting temperatures about two degrees Fahrenheit cooler than the birds would encounter had they not moved up their breeding time — almost exactly counterbalancing the two-degree rise in average temperatures recorded over the last century.

The scientists’ analysis, published last fall in the Proceedings of the National Academy of Sciences, showed that the birds’ temperature-rebalancing act could limit the exposure of eggs and fragile nestlings to dangerous overheating.

Early nesting has been noted in individual bird species, but such a widespread behavioral change over a very large and varied landscape was “not on the radar at all,” said Jacob Socolar, a postdoctoral scientist in Dr. Tingley’s lab.

The study of 202 species showed that most of them are adapting to rising temperatures with “overlooked flexibility,” the scientists reported — unexpected hope for wildlife in an uncertain time.

“Does it mean climate change is not bad for you? No,” said Dr. Tingley, now an assistant professor of ecology and evolutionary biology at the University of Connecticut. “But any time we find that a species has more adaptive mechanisms to cope with climate change, that’s a good thing.”