The Antiquarian Booksellers’ Association’s book fair in 2013 in London. It said it was dropping AbeBooks as a sponsor of its 2019 book fair. Credit Oli Scarff/Getty Images

Above is the lead photo in an intriguing story of an act of protest, reported by by David Streitfeld. Reading it, no surprise that he won a Pulitzer Prize for Explanatory Reporting five years ago in a series of stories about Apple. Now his attention is placed on another company that has come to have an outsized role in the world, and needs explanation, and as I see it, deep concern. It is a company that I have only rarely, and only when I had no acceptable alternative, paid money to. When I have bought from them I have regretted it each time, even though the price I paid was the lowest available and the service was remarkable. Why do I resist doing business with that company and why do I wish others would do the same? That is a puzzle worth solving, and I hope that journalists are up to the task. Today, the headline proclaims:

Amazon Plans to Split Its Second Headquarters in 2 Locations

Bezos during his appearance at Economic Club of Washington, in September. Photograph by Andrew Harrer / Bloomberg / Getty

Exciting stuff for the politicians who want to claim credit for Amazon’s choice. But there’s a very big story behind all that. The company is powerful, and what is said about power leading to corruption is too simple for this story, and for the man leading this powerful enterprise.

I can find no reason to dislike Jeff Bezos personally. Any entrepreneur can find reasons to admire his intelligence, his determination and his contrarian approach. Every time I see him in recorded interview video I find his enthusiasm and laughter contagious. But I have had growing concern in the last decade about the company he founded, because of all the ways the lives of everyone around me seem to feed into Amazon’s market power. If you have time to read only one article on this topic today, it should probably be this one about Amazon’s location choice for HQ2: 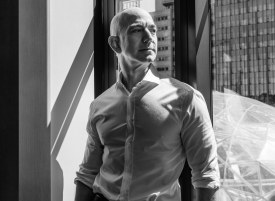 Jeff Bezos in Seattle, which will lose its status as the sole headquarters of Amazon. Photograph by Kyle Johnson / NYT / Redux

On October 21, 2016, an entity called the Cherry Revocable Trust purchased two adjacent buildings in the Kalorama neighborhood of Washington, D.C., for twenty-three million dollars. The buildings, which previously had housed the Textile Museum, were to be converted into a private residence—at twenty-seven thousand square feet, the largest in the city. In January, it was revealed that the anonymous purchaser represented by the Cherry Revocable Trust was Jeff Bezos, the founder and C.E.O. of Amazon. The finished property will have eleven bedrooms, twenty-five bathrooms, five staircases, and a large ballroom suitable for gatherings of Washington’s notables. It will be, in the words of the journalist Ben Wofford, “a veritable Death Star of Washington entertaining.”

In July, Jeff Bezos became the richest man in modern history, when his net worth topped a hundred and fifty billion dollars. In September, Amazon became the second company, after Apple, to achieve a trillion-dollar valuation. These two milestones in the history of this country and capitalism passed with little fanfare outside the business world, preoccupied as we are by the antics of the pretend mogul who resides in the White House. But Bezos, an actual mogul, has also been making moves in Washington, none more high-profile than his purchase of the Washington Post, in 2013. More quietly, Amazon is investing heavily in the area. Fairfax County, Virginia, is now home to the East Coast campus for Amazon’s cloud-computing arm, Amazon Web Services, which is widely expected to win a contract with the Department of Defense worth ten billion dollars a year. About five miles away, in Loudoun County, Amazon is building a six-hundred-thousand-square-foot data center to anchor the company’s nearly thirty centers in the area. Between May and July, Amazon, advertised more than eight hundred jobs in the Washington area, most in Northern Virginia. That’s more openings than the company has advertised anywhere else in the country, save Seattle, its headquarters and original corporate office.

There is more. By the end of the year, Amazon is expected to announce the outcome of its long-running search for a second headquarters, or HQ2, which will supplement its office in Seattle. HQ2, Bezos has said, will be a “full equal” to the Seattle office, employing fifty thousand white-collar workers, each earning more than a hundred thousand dollars a year, on average. The company’s short list includes Chicago, Austin, Newark, and New York, but many observers and speculators are betting that it will land in the Washington area. Last week, the gambling Web site Bovada had Northern Virginia as a heavy favorite. On Saturday, the Washington Post reported that the company has been having “advanced discussions” about selecting Crystal City, in Arlington County, Virginia.

The benefits of being chosen as the site of HQ2 are obvious, including at least five billion dollars in local investments. But Washington is already one of the most expensive, segregated, and unequal metropolitan areas in the country, despite—and in part because of—an already large white-collar workforce earning incomes well above the national median. Some fear, too, that with a base in Washington, Amazon might receive more favorable treatment by policymakers. “The only thing in between Amazon and one trillion and two trillion in market cap is regulation,” Scott Galloway, a professor at New York University’s Stern School of Business, said at Recode’s Code Commerce conference, in September. “No one is going to regulate the gentleman throwing out the first pitch of the 2019 Washington Nationals season.”

Amazon is the largest private employer in Seattle, where it was founded in 1994. It has about forty-five thousand employees within city limits and uses twenty per cent of Seattle’s office space: ten million square feet spread across forty-four buildings, a larger footprint than the city’s next forty largest employers combined. In 2010, Amazon had five thousand employees in the city. Since then, by the company’s own estimates, it has generated fifty-three thousand other jobs and nearly forty billion dollars in additional investments in Seattle’s economy. Seattle led large American cities in real G.D.P. growth in 2017.

Other tech firms based or heavily invested in the area, including Microsoft, can be credited with some of Seattle’s economic expansion. But Amazon has reshaped the city’s landscape, which now includes three glass domes enclosing a rainforest—a place, Amazon has said, where its employees can “think and work differently,” surrounded by forty thousand plants imported from more than thirty countries. Amazon’s growth has also, predictably, deepened the city’s affordability crisis. Seattle now has the third-most expensive housing in the country, according to Zillow—behind only San Francisco and San Jose, California—and one of the largest homeless populations in the country, which has increased sharply in recent years. Earlier this year, Seattle’s city council passed a tax on large corporations aimed at raising an estimated forty-seven million dollars a year for affordable-housing initiatives. But after about a month the city council repealed the tax—in response to a ballot challenge funded in part by Amazon, which threatened to leave Seattle if the tax was implemented. Matthew Gardner, a tax-policy analyst at the Institute on Taxation and Economic Policy, told the Washington Post, “Nobody on Seattle’s city council wants to be the one who chased Amazon out of town.”

This conflict has done little to dampen the enthusiasm of the local governments across the country vying for HQ2. Since Bezos announced the search, in September, 2017, a grand contest has unfolded to win the five-billion-dollar project, with cities and towns across the country offering tax cuts and freezes, redevelopment plans, and other incentives. The town of Stonecrest, Georgia, offered to change its name to Amazon. The mayor of Kansas City bought and reviewed a thousand products on Amazon’s consumer Web site. The mayor of Gary, Indiana, the impoverished former steel town just outside Chicago, paid ten thousand dollars for a Times advertisement that invoked the American Revolution. “I know locating to me may seem far-fetched,” it read. “But far-fetched is what we do in America. It was far-fetched for 13 scrawny American colonies to succeed against the might of the British Empire.”

In January, Amazon narrowed its initial list to twenty finalists. Three are in the Washington area: Northern Virginia; Montgomery County, Maryland; and Washington itself. The region has much to recommend itself to Amazon and its corporate employees: good colleges and public schools, two international airports, and an expansive—if troubled—mass-transit system. Northern Virginia also has some of the East Coast’s cheapest electricity and a large pool of qualified talent, built over decades of local growth in the telecommunications and defense industries. An estimated seventy per cent of the world’s Internet traffic is processed through data centers in Loudoun County—nondescript spaces that are as integral to the construction of our age as forests, quarries, and mines were generations ago.