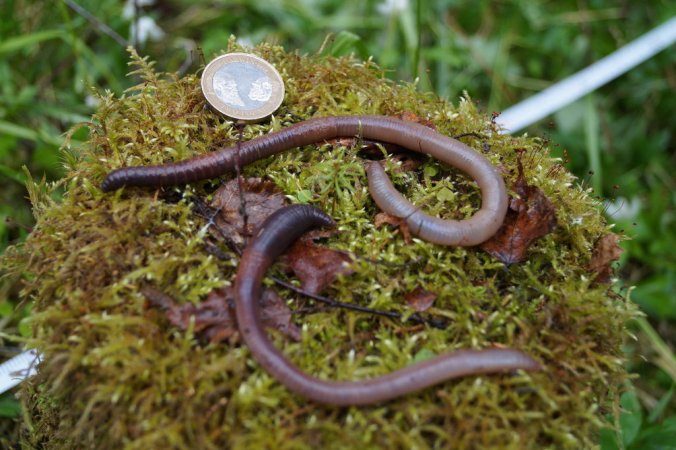 The world’s boreal forests have been largely earthworm-free since the last Ice Age. But as invaders arrive and burrow into the leaf litter, they free up carbon and may accelerate climate change. Cristina Gonzalez Sevilleja

In my daily scan for information related to the environment, I invariably learn something that surprises me. Like the fact that the earthworm, which provide valuable ecosystem services, can also represent danger on a global scale:

‘Earthworm Dilemma’ Has Climate Scientists Racing to Keep Up

Earthworms recently have spread to Alaska’s boreal forest. In some areas, the biomass of earthworms is 500 times greater than that of moose, a keystone species. Lance King/Getty Images

Cindy Shaw, a carbon-research scientist with the Canadian Forest Service, studies the boreal forest — the world’s most northerly forest, which circles the top of the globe like a ring of hair around a balding head.

A few years ago, while conducting a study in northern Alberta to see how the forest floor was recovering after oil and gas activity, she saw something she had never seen there before: earthworms.

“I was amazed,” she said. “At the very first plot, there was a lot of evidence of earthworm activity.”

Native earthworms disappeared from most of northern North America 10,000 years ago, during the ice age. Now invasive earthworm species from southern Europe — survivors of that frozen epoch, and introduced to this continent by European settlers centuries ago — are making their way through northern forests, their spread hastened by roads, timber and petroleum activity, tire treads, boats, anglers and even gardeners.

As the worms feed, they release into the atmosphere much of the carbon stored in the forest floor. Climate scientists are worried.

“Earthworms are yet another factor that can affect the carbon balance,” Werner Kurz, a researcher with the Canadian Forest Service in Victoria, British Columbia, wrote in an email. His fear is that the growing incursion of earthworms — not just in North America, but also in northern Europe and Russia — could convert the boreal forest, now a powerful global carbon sponge, into a carbon spout.

Moreover, the threat is still so new to boreal forests that scientists don’t yet know how to calculate what the earthworms’ carbon effect will be, or when it will appear.

“It is a significant change to the carbon dynamic and how we understand it works,” Ms. Shaw said. “We don’t truly understand the rate or the magnitude of that change.”

The relationship between carbon and earthworms is complex. Earthworms are beloved by gardeners because they break down organic material in soil, freeing up nutrients. This helps plants and trees grow faster, which locks carbon into living tissue. Some types of invasive earthworms also burrow into mineral soil and seal carbon there…