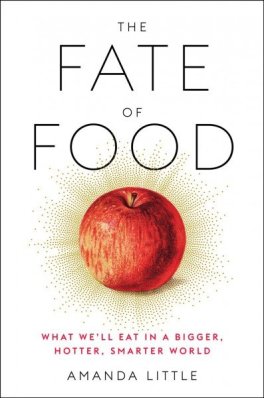 An interview about a book that picks up on themes that we have been following since we started this platform:

3D food printers, laboratories where meat is grown from cultured animal cells, robots that can weed crops without using chemicals and indoor farms where vegetables are grown without soil or sun are some of the new approaches investigated by Amanda Little in her new book “The Fate Of Food: What We’ll Eat In A Bigger, Hotter, Smarter World.”

She’s traveled to 13 states and 11 countries researching changes in our food system. Her reporting on energy, technology and the environment has been published in The New York Times, The Washington Post, Rolling Stone and other publications. She’s a professor of journalism and science writing at Vanderbilt University.

Amanda Little, welcome to FRESH AIR. Tell us some of the ways in which climate change is affecting the global food supply.

AMANDA LITTLE: Well, let’s just start in my own region. I live in Nashville, Tenn., and we’ve heard recently that in the Midwest – in Indiana, Kansas, Missouri, Illinois, Iowa – there have been terrible storms and tornadoes that have had huge impacts on grain production, soy, and corn, in particular. I think they’ve said that there is a historic delay in the planting season because of the sodden fields.

The farmers just simply can’t plant their soy crop because they have – you know, there haven’t been enough dry days. And the same goes for corn. In the past five years, in 18 states that produce the majority of corn had 90 percent of their plant in the ground by now and they have only about 55% because of the rain and flooding.

So that’s just sort of one example of, you know, these subtle changes that farmers are having to deal with. In this case, related to flooding. But drought, heat, invasive species and insects, diseases, crop diseases and so forth have been affecting virtually every, you know, farm in the world.

GROSS: So this made me think. You’re right that the greenhouse gases that now threaten the future of the world’s farmers are also largely produced by the farms themselves, especially the big, mechanized ones. Would you explain that paradox?

LITTLE: That’s true. (Laughter). It’s sort of – agriculture has got us into this mess, and now climate change is biting back. And I will say, you know, agriculture is one of sort of many aspects of modern civilization that’s, you know, contributing to the, you know, global warming phenomenon. But I believe food production is responsible for about 15 to 20% of total greenhouse gas emissions globally, which is about as much or more than all transportation forms combined.

And by the way, it goes beyond, you know, emissions themselves. I believe it’s 70% of fresh water used by humans flows to farming. Agriculture has altered, you know, every inhabited place on earth. And we can see the impacts of agriculture probably more than any other human activity, not just in climate change but in the way that it’s transformed rivers, and lakes and land.

So it’s a story that’s been building for millennia since, you know, the dawn of civilization (laughter). I mean, it’s really coming to a head right now…

Read or listen to the entire interview here.