Starbucks at South Terminal, Gatwick. The scheme is being launched by Starbucks and environmental charity Hubbub. Photograph: Zute Lightfoot

We have been using this cup since early 2017, and it really should have replaced the paper cup by now. But slow as the pace is, we are happy to read the news of this experiment and wish it well: 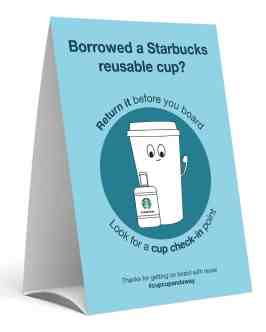 The UK’s first airport reusable coffee cup trial gets under way this week at Gatwick, offering passengers the opportunity to borrow and return refillable cups in a bid to help cut waste and tackle “throwaway” culture.

Customers buying hot takeaway drinks from Starbucks will have the option to borrow a free reusable cup instead of using a paper cup, which they can then drop off at a designated point before boarding their flight.

The trial – starting on Monday in Gatwick’s South Terminal – will help customers reduce their disposable cup usage in a manageable “closed loop” environment that could be used in any travel hub. The scheme is being launched by Starbucks in partnership with the environmental charity Hubbub with support from Gatwick, the UK’s second largest airport.

The use of reusable cups in all coffee chains has increased in the UK – thanks to incentives such as discounts – but anecdotal evidence suggests consumers tend not to bring the cups with them when they’re going on holiday.

The aim of the trial is to put 2,000 reusable Starbucks cups in circulation throughout Gatwick’s South Terminal, which could drastically reduce the number of paper cups being used each day. If only 250 customers opted for a reusable cup each day, for example, more than 7,000 paper cups could be saved in one month.

“We know people care about waste, but it’s often hard to do the right thing when travelling” said Trewin Restorick, the chief executive and co-founder of Hubbub. “We want to find out whether people will get onboard with reusing cups, if we make it easy and convenient. The airport is the ideal environment to trial a reusable cup scheme as it has the potential to reduce large volumes of paper cup waste.”…