Biogas came to the attention to most of us contributing to this platform while in India. It has remained on our radar as an important, if quaint farmland quirky skunkworks. Thanks to Yale e360 for highlighting its emergence as a scaling alternative to other forms of natural gas:

Could Renewable Natural Gas Be the Next Big Thing in Green Energy?

For decades, small-scale biogas systems have collected methane from landfills, sewage plants, and farms. Now, in Europe and the U.S., the growth of this renewable form of natural gas is taking off as businesses capture large amounts of methane from manure, food waste, and other sources.

A truck delivers food waste to an anaerobic digester at a Massachusetts farm. VANGUARD RENEWABLES

In the next few weeks, construction crews will begin building an anaerobic digester on the Goodrich Family Farm in western Vermont that will transform cow manure and locally sourced food waste into renewable natural gas (RNG), to be sent via pipeline to nearby Middlebury College and other customers willing to pay a premium for low-carbon energy. 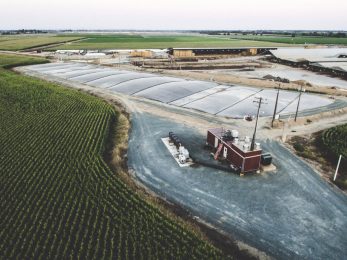 For the developer, Vanguard Renewables, the project represents both a departure and a strategic bet. The firm already owns and operates five farm-based biogas systems in Massachusetts; each generates electricity on site that is sent to the grid and sold under the state’s net-metering law. The Vermont project, however, is Vanguard’s first foray into producing RNG — biogas that is refined, injected into natural gas pipelines as nearly pure methane, and then burned to make electricity, heat homes, or fuel vehicles.

“Producing RNG for pipeline injection and vehicle fueling is the evolution of where everything is going” in the biogas sector, says John Hanselman, Vanguard’s CEO.

Biogas has been around for a long time in the United States, mainly in the form of rudimentary systems that either capture methane from landfills and sewage treatment plants and use it to produce small amounts of electricity, or aging digesters at dairy operations that might power a local farm and send some surplus power to the grid. But those are fast becoming outdated and out-produced by a new wave of large-scale renewable natural gas projects that are springing up around the country. These ventures are tapping into heretofore unexploited sources of energy: some are capturing the vast amounts of methane generated by manure from some of the 2,300 hog farms that dot eastern North Carolina; some are building biodigesters to turn clusters of large California dairy farms into energy hubs; and some are seeking to divert food waste from landfills and transform it into vehicle and heating fuels.

Renewable natural gas is reaching a tipping point for several reasons: An increasing number of third-party operators like Vanguard are relieving farmers and landfills of the burden of running their own energy systems and are introducing more sophisticated technologies to capture methane and pump it directly into pipelines. Some states, including California, are passing laws requiring the development of renewable natural gas. And utilities across the country are starting to support these new initiatives, as evidenced by the new partnership between Dominion Energy and Smithfield Farms — the world’s largest pork producer — to develop new hog waste biogas projects. For proponents, the ultimate goal is to replace a significant portion of the fossil-derived natural gas streaming through U.S. pipelines with pure methane generated by human garbage and animal and agricultural waste.

“If you can recover energy before sending what remains back to the soil, that’s a great thing,” said Nora Goldstein, the longtime editor of BioCycle Magazine, which has covered the organics recycling and anaerobic digestion industries for decades. “You look at all those benefits and say, ‘Why aren’t more people doing this?’ The key is you need to do it correctly.”

The untapped potential — especially of the billions of gallons of animal manure and millions of tons of food waste generated each year in the U.S. — is immense. According to a 2014 “Biogas Opportunities Roadmap” report produced by the U.S. Environmental Protection Agency, the Department of Agriculture, and the Department of Energy, the U.S. could support at least 13,000 biogas facilities, fed by manure, landfill gas, and biosolids from sewage treatment plants. Those new systems could produce 654 billion cubic feet of biogas per year — enough renewable energy to power 3 million homes. And a study by the World Resources Institute estimated that the 50 million tons of organic waste sent to landfills or incinerated every year in the U.S has the energy content of 6 billion gallons of diesel fuel, 15 percent of all diesel consumed by heavy-duty trucks and buses…