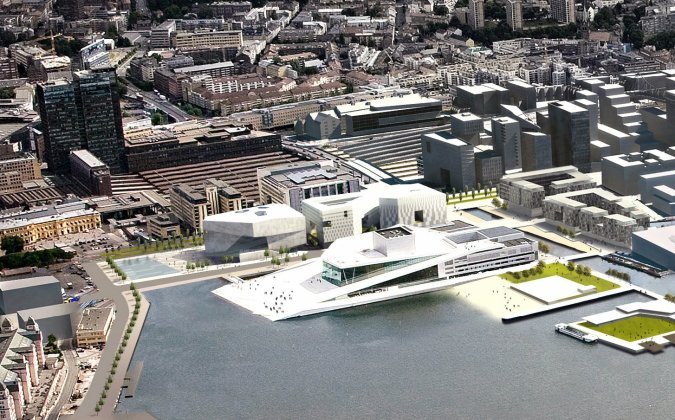 A rendition of the new main branch of Deichman, Oslo’s public library. This library is designed to see and be seen. Atelier Oslo and Lund/Hagem architects

Alyson Krueger, who we have not seen in our pages for nearly two years, has a story that indulges one of our favorite pastimes, library-celebrating, in a round-the-world review of the latest, greatest:

Where Libraries are the Tourist Attractions

Libraries are having a moment. In the past few years dozens have opened across the world, resembling nothing like the book-depot versions from the past.

About a decade ago libraries across the world faced a dilemma. Their vital functions — to supply books and access to information for the public — were being replaced by Amazon, e-books and public Wi-Fi.

To fight for their survival, said Loida Garcia-Febo, president of the American Library Association, libraries tried to determine what other role they could play. “They invented these amazing new initiatives that are finally launching now,” she said. It took them this long to raise money and build them.

A page from the “Ulysses” notebooks of James Joyce. Museum of Literature Ireland

Libraries are certainly having a moment. In the past few years dozens of new high-profile libraries have opened close to home and across the world. And they certainly don’t resemble the book-depot vision of libraries from the past.

To attract visitors from home and abroad, many libraries have advanced, even quirky amenities. They have rooftop gardens, public parks, verandas, play spaces, teen centers, movie theaters, gaming rooms, art galleries, restaurants and more. The new library in Aarhus, Denmark, has a massive gong that rings whenever a mother in a nearby hospital gives birth.

Only one-third of the 185,000-square-foot Helsinki Central Library Oodi is allocated to books. Tuomas Uusheimo

In March, Oodi welcomed its one millionth visitor. “We have tourists from all over the world visiting, but mainly from Europe mostly, China, Japan and America,” said Anna-Maria Soininvaara, the library’s director. “Usually they want to experience the Maker Space and ask where all the books are because the shelves are always half empty because they’re all on loan.”…