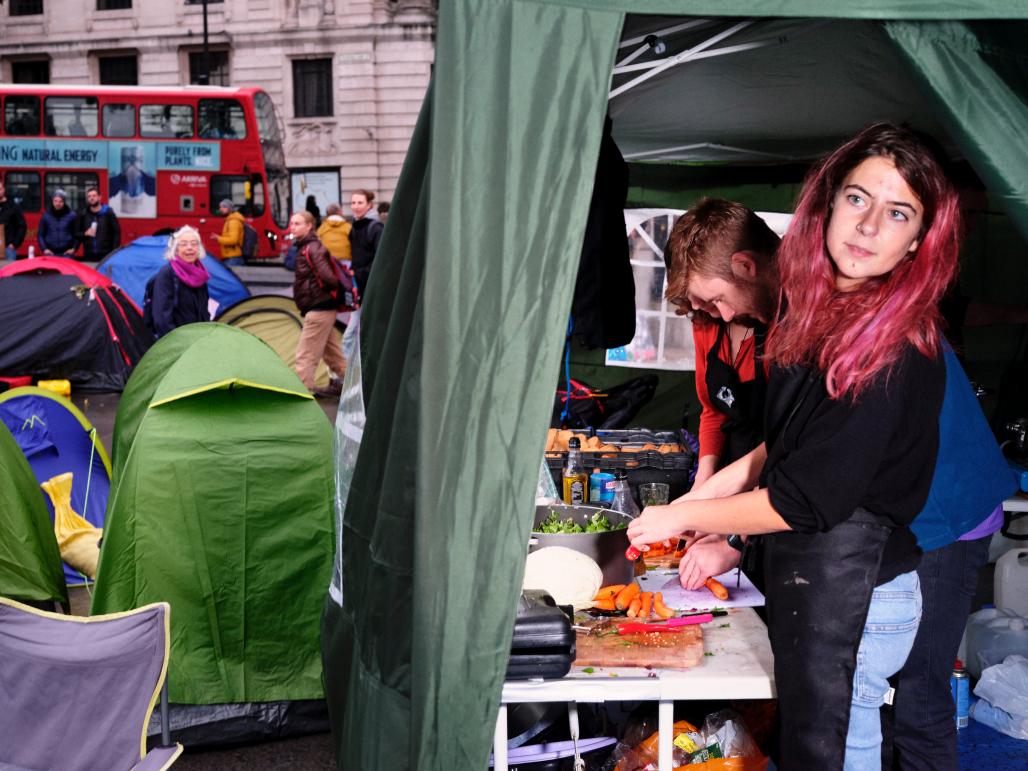 We were wondering how this worked. Thanks to Dan Hancox and the Economist for showing us how:

How to feed a protest movement: cooking with Extinction Rebellion

A peek inside the “Rebel Kitchen”

This is Coiley’s fourth Extinction Rebellion kitchen. Staffed by a rotating squad of around 30 volunteers, it serves food and hot drinks 24 hours a day to protesters and anyone else who needs it. All the food is vegan or vegetarian and is assembled from donations.

“This in itself is a political action,” says Coiley, a bright young man who, when not involved in cooking at demonstrations, is working on a PhD on sustainable food and the state. “There are people here who wouldn’t consider themselves activists but just feel really comfortable coming into the kitchen. It sounds basic, but I think it’s really inspiring.”

How you feed an activist, or indeed thousands of activists, may seem trivial compared with the colossal existential questions they are trying to tackle. But they are not unrelated. What we eat is inseparable from the climate crisis: around 30% of human emissions are associated with food from production to consumption. Our dietary choices are also political. Cynics often use the subject of food to nitpick at Extinction Rebellion activists (or vegan dinner-party guests). Barely a protest goes by without a high-profile contrarian flagging up a photo of a protester in a chain restaurant as evidence of hypocrisy.

Daft as the nitpicking can be, it highlights crucial questions on the importance of personal responsibility, ie, being the change you want to see in the world versus big-picture structural change. Coiley has pondered this in his academic work, as well as during his time cooking in Trafalgar Square’s “Rebel Kitchen”. He argues that Extinction Rebellion is right not to “shame” people about what they eat. “We’re trying to help people see that a different world is possible,” he says, “where we can all have nutritious, sustainable food, that is not harmful and can be enjoyable too.” Coiley thinks good cooking can show “we don’t need steaks to be having an amazing time.”

The Rebel Kitchen is housed in four gazebos customised with various pieces of tarpaulin and lots of gaffa tape. A wishlist on a whiteboard outside lists oranges, bananas, savoury snacks, hummus and homemade vegan cakes and treats. People photograph it on their phone and return with donations later. Inside crates are dedicated to everything from sauces to dried fruits, pulses to vegetables and a fine selection of vegan and non-vegan biscuits. At the service end of the tent, lentil and vegetable curry is doled out of a 20-litre thermos vat, along with lots of bread and catering-sized saucepans of salad. There’s a tea station too and around the back a washing-up station also run by volunteers. There is a “no disposables” rule at this pop-up café…