A to-scale sculpture of a juvenile humpback whale ribcage made of plastic bottles.
Kirk Siegler/NPR

On The Oregon Coast, Turning Pollution Into Art With A Purpose 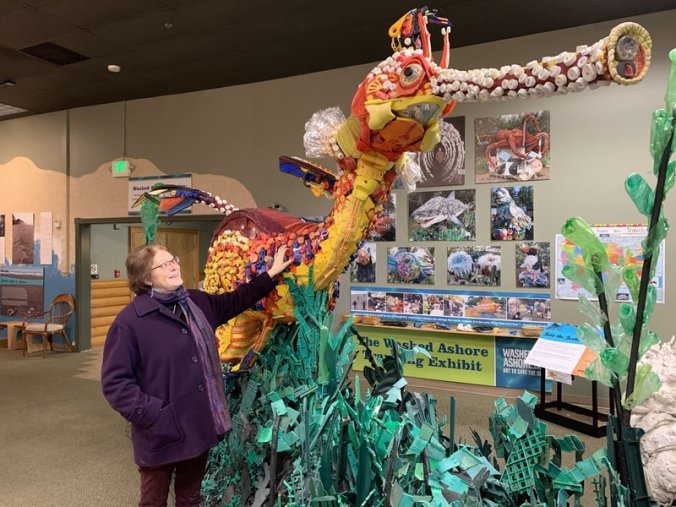 At Coquille Point along the remote and rugged southern Oregon Coast, the wind is tumultuous and the sea just as violent. Huge waves crash up against the giant, moss-cloaked rocks perched off the beach.

This particular stretch of the Oregon coastline is famous for being pristine and wild. But train your eyes down a little closer to the beach and sand as Angela Haseltine Pozzi so often does, and even here you’ll find bits of plastic.

“I think the most disturbing thing I find is detergent bottles and bleach bottles with giant bite marks out of them by fish,” she says.

A sea star made mostly of plastic water bottles from the 2008 Summer Olympics in China that are still washing up on Oregon beaches today.
Kirk Siegler/NPR

Haseltine Pozzi is a local artist and longtime art teacher who’s made it her mission to collect as much of this shameful garbage as possible. It washes up from Asia, Europe, California and right here in Oregon.

In her gallery in the nearby town of Bandon, where she’d spend summers with her grandmother exploring the wild beaches, she’s now taking these plastic invaders and turning them into jaw-dropping sculptures. The plastic bottle caps, cocktail toothpicks, shotgun shell casings — anything — form life-size garbage creatures of the very marine life threatened by all this plastic.

“The idea is you can’t ignore something that’s really big,” Haseltine Pozzi says. “It grabs your attention.”

Some are almost comical, if in a dark way. It’s indeed hard to ignore the giant weedy sea dragon, its neck made of suction cups from old vacuum cleaners, its eyes are black plastic water bottle caps. Nearby, there is a jellyfish sculpted from golf balls. There are sharks and birds with feathers made from fastened together flip flops and plastic lighters…