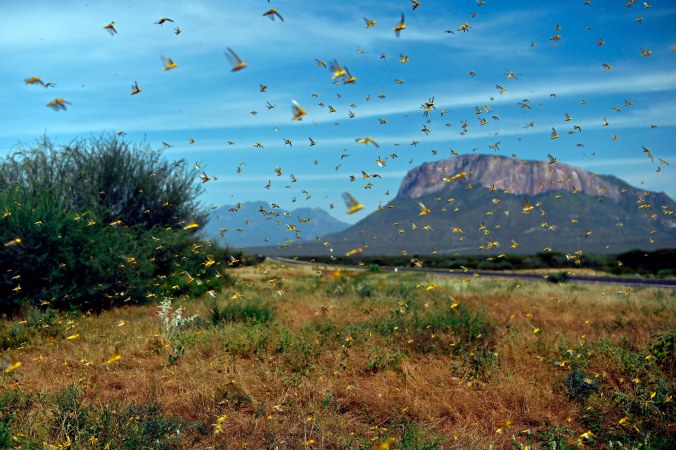 A swarm of locusts north of Nairobi, Kenya, in January. The U.N. described an outbreak of desert locusts as a threat to food security. Photograph by Tony Karumba / AFP / Getty

We need more information, better quality information, and the most relevant information on climate issues. A newsletter, maybe? Bill McKibben is on it:

WELCOME TO THE CLIMATE CRISIS NEWSLETTER

We’re eight weeks into the new decade, and, so far, we’ve had the warmest January ever recorded. (Indeed, researchers at the National Oceanic and Atmospheric Administration said that 2020 is more than ninety-eight per cent likely to be one of the five warmest years ever measured, with a nearly forty-nine-per-cent chance to set a new annual record.) We’ve seen the highest temperature ever measured on the Antarctic continent, and also record swarms of locusts descending on the Horn of Africa, a plague which scientists assure us will “become more frequent and severe under climate change.”

I’m calling this new newsletter—and welcome aboard—The Climate Crisis because this is what a crisis looks like. I’ve been at this beat for so long that when I first started writing for The New Yorker on this topic, in the nineteen-eighties, we called it the “greenhouse effect.” “Global warming,” “climate change”—those are fine, too. But they don’t capture where we are right now: not facing some distant or prospective threat but licked by the flames. Thousands of people huddled on Australian beaches this year, ready to wade into the ocean as their only protection from the firestorms raging on the shore. This is not only a crisis—it is the most thorough and complete crisis our species and our civilizations have ever faced, one there is no guarantee that we will survive intact. Does that sound extreme? Consider the conclusions of a team of economists from the world’s largest bank, in a report to high-end clients which leaked to the British press, last Friday: “Something will have to change at some point if the human race is going to survive.”

But the name of this newsletter is also a nod to W. E. B. Du Bois, and the magazine that he founded a hundred and ten years ago, at the start of the N.A.A.C.P. The Crisis was, and is, a crucial journal in the analysis of the race hatred that mars and shames and undermines our collective life to this day; it linked readers to news from around the world, so that they could examine the currents roiling their lives. I’ll do the same in a section we’re calling Climate School—perhaps, if only by long exposure, I have some sense of how emerging science, economics, and politics fit into the larger picture. I mostly won’t be doing original reporting. (Check out Emily Atkin’s excellent daily newsletter, Heated, for that.) And I won’t shy away from talking about the activism and organizing that many people—myself included—are now engaged in. Du Bois’s The Crisis was an organ of action, constantly suggesting ways that its readers could move forward. “Is a toothache a good thing?” Du Bois asked, in the first issue. “No. Is it therefore useless? No. It is supremely useful, for it tells the body of decay, dyspepsia and death.” A toothache, he declared, “is agitation,” and agitation is necessary “in order that Remedy may be found.” Since I am an agitator as well as a journalist, I’ll include many suggestions about where a push might help us make progress.

My sense is that we’ve reached a place where many people are eager to help. National polling released this month, in a study by researchers at Yale and George Mason Universities, found that one in five Americans said that they would “personally engage in non-violent civil disobedience” against “corporate or government activities that make global warming worse” if a person they liked and respected asked them to. If that’s anywhere close to true, then it’s possible to imagine a movement big enough to make a difference—a movement one can see already emerging with the school climate strikers, the extinction rebels, and the Green New Dealers. I hope to introduce you to many of these people, and to the scientists, entrepreneurs, and policy wonks whose work undergirds their activism—people I’ve met in my years as a journalist and a volunteer at 350.org, the global climate campaign. Most weeks, I’ll include a short interview that lets them address you directly.

I wouldn’t bother doing any of this if I didn’t think that we could still make a real difference in the outcome. But I can’t offer you any guarantee that we’ll win—the short time that science gives us to make sweeping changes is daunting. When an iceberg twice the size of Washington, D.C., crashes into the Southern Ocean, or when the South is experiencing historic winter flooding, it’s a reminder that we’re a long way back in this race. The only guarantee I’ve got is that the fight is under way. Thank you for being a part of it.

An as-yet-unpublished study from researchers at Brown University shows that a fourth or more of the climate chatter on Twitter is produced by automated bots, which are more likely to be on the side of climate denial. This is good to know: in real life, as opposed to social-media combat, polling shows that more and more people understand the reality of climate change.

The New Yorker has published luminous climate coverage over the years: few writers match the penetrating authority of Elizabeth Kolbert, and younger writers such as Carolyn Kormann are doing superb reporting. This recent piece, by Robin Wright, is excellent both for its evocation of the Antarctic Peninsula (the place on Earth, I think, that most feels like another planet) and its reminder that this is a war that we can’t afford to lose, because the effects will last essentially forever. And Bernard Avishai’s account of the vanishing solar-tax credit is a reminder of just how much quiet damage the Trump Administration is doing.

A new study in the journal Nature implies that the total methane emissions—the most significant global-warming gas after CO2—from man-made fossil sources (coal, natural gas, and oil) are higher than previous estimates. That means that they underestimated how much comes from oil, gas, and coal—which, in a twisted way, is kind of good news. Because, if we wanted to, we could turn off that source—say, by replacing gas with solar and wind power. The invaluable Hiroko Tabuchi provided a particularly good account in the Times, under the always-useful headline “Oil and Gas May Be a Far Bigger Climate Threat Than We Knew”; a key point for understanding our current energy debate is that natural gas is a bridge fuel to a dramatically hotter planet.

Without Christiana Figueres, there would have been no Paris climate accord—the Costa Rican-born former executive secretary of the U.N.’s climate-change convention worked tirelessly to create an opening where the Kyoto and Copenhagen processes had run aground. Her new book, co-written with Tom Rivett-Carnac, is called “The Future We Choose.”…