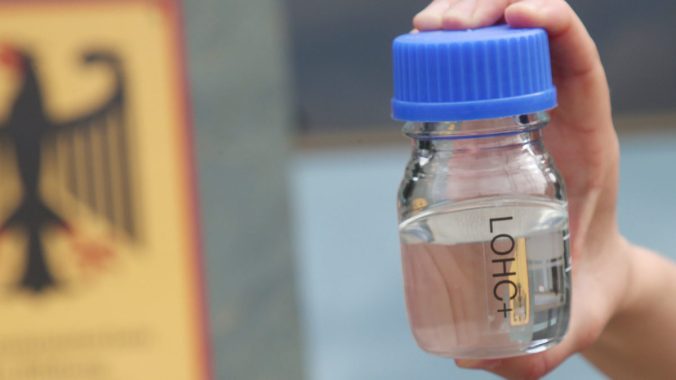 Green hydrogen can be stored in a liquid form. WOLFGANG KUMM/PICTURE-ALLIANCE/DPA/AP IMAGES

Thanks to Yale e360, as always, for news on innovative uses of water related to green energy:

Green Hydrogen: Could It Be Key to a Carbon-Free Economy?

Green hydrogen, which uses renewable energy to produce hydrogen from water, is taking off around the globe. Its boosters say the fuel could play an important role in decarbonizing hard-to-electrify sectors of the economy, such as long-haul trucking, aviation, and heavy manufacturing.

Saudi Arabia is constructing a futuristic city in the desert on the Red Sea called Neom. The $500 billion city — complete with flying taxis and robotic domestic help — is being built from scratch and will be home to a million people. And what energy product will be used both to power this city and sell to the world? Not oil. The Saudis are going big on something called green hydrogen — a carbon-free fuel made from water by using renewably produced electricity to split hydrogen molecules from oxygen molecules.

This summer, a large U.S. gas company, Air Products & Chemicals, announced that as part of Neom it has been building a green hydrogen plant in Saudi Arabia for the last four years. The plant is powered by 4 gigawatts from wind and solar projects that sprawl across the desert. It claims to be the world’s largest green hydrogen project — and more Saudi plants are on the drawing board.

Green hydrogen? The Saudis aren’t alone in believing it’s the next big thing in the energy future. While the fuel is barely on the radar in the United States, around the world a green hydrogen rush is underway, and many companies, investors, governments, and environmentalists believe it is an energy source that could help end the reign of fossil fuels and slow the world’s warming trajectory.

“It is very promising,” said Rachel Fakhry, an energy analyst for the Natural Resources Defense Council. Experts like Fakhry say that while wind and solar energy can provide the electricity to power homes and electric cars, green hydrogen could be an ideal power source for energy-intensive industries like concrete and steel manufacturing, as well as parts of the transportation sector that are more difficult to electrify. “The last 15 percent of the economy is hard to clean up — aviation, shipping, manufacturing, long-distance trucking,” Fakhry said in an interview. “Green hydrogen can do that.”