Can you name this bird. Caroline Tompkins for The New York Times

On this day each year, we reflect on things to be grateful for. Today, as tempting as it may be to talk about coffee, I am mindful of how important birds have been in our family. In 2014 I was on the terrace at Xandari with Seth. He was recently graduated from college, where he had worked on an outreach program for school children to get them interested in birds, and birdwatching. Now he was training to manage the type of lodge where birdwatching is an activity, and one of his sidelines at Xandari was guiding birdwatching tours in the forest reserve that was part of the property.

As we sat on the terrace discussing the day’s plan, a young couple and their son sat down for breakfast. I said hello to them, and I asked the boy if he was enjoying Costa Rica. He lit up, and said it was his first morning here, but so far it was great. I asked what was great, and without missing a beat he said, with cheer: the birds woke me up! The conversation that followed was a once in a lifetime pleasure. I asked why he was so happy about that, and he and his parents explained that during the school year that had just ended, his class had been “celebrating urban birds” in Brooklyn, NY. It turned out his class was one of the many that Seth had been doing outreach with during the previous year. I told the young fellow that if he wanted to take a birdwatching tour, I had a recommendation of who could guide him.

I am mindful about birds today thanks to Dan Sinker’s op-ed essay:

The Birds Are Outside 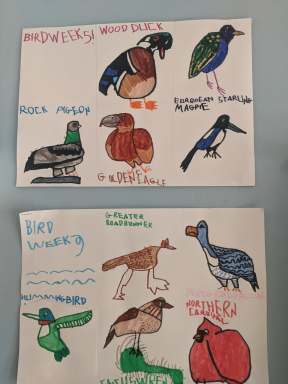 Me, my wife, our teenager and our 5-year old, we knew nothing about birds before the lockdown sent us inside in March. Our cramped home was suburban-convenient before the pandemic hit, nestled a few blocks from a school we don’t go in and a train downtown we won’t ride, and now it is just small.

It was a bedroom short and had nothing a person could call work space beyond the dining room table even before it became our entire lives. But it did have windows, sunny and bright in the morning, that looked out on the worn patch of yard just outside so I bought a bird feeder and some cheap seed and mounted it just outside our dining room window. We needed a distraction.

The birds came in swarms, tiny brown ones at first that constantly pecked at each other over the absolute trash seed we’d put out. It was like we’d opened an avian fight club. Then came the cardinals, regal and red, and the goldfinches, a hallucinatory yellow. They all fought, too, but they were beautiful.

The 5-year-old kept telling us he’d seen a blue jay, but it would always fly off, he’d claim, when we turned around. We thought it was a way of getting attention after losing his preschool, his swim lessons, his friends — everything his tiny world encompassed — to the pandemic. A phantom bird for attention, a way of controlling the tiny slice of world that existed outside our window. When I saw it for the first time, its iridescent blue tail catching the late spring sunlight, I screamed. He was right…

2 thoughts on “Thanks For The Birds”