Yesterday’s post was about a book that argues we must change the way we source food. Water use is a parallel topic, of equal importance, and today National Public Radio (USA) presents an investigative report about Louisiana’s challenges related to water, and changes that must be made:

Known For Its Floods, Louisiana Is Running Dangerously Short Of Groundwater 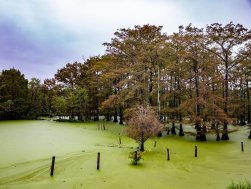 Louisiana is known for its losing battle against rising seas and increasingly frequent floods. It can sometimes seem like the state has too much water. But the aquifers deep beneath its swampy landscape face a critical shortage.

Groundwater levels in and around Louisiana are falling faster than almost anywhere else in the country, according to U.S. Geological Survey data. An analysis by the Investigative Reporting Workshop and WWNO/WRKF traced the problem to decades of overuse, unregulated pumping by industries and agriculture, and scant oversight or action from legislative committees rife with conflicts of interest.

Experts warn that all of these factors threaten the groundwater that nearly two-thirds of Louisianans rely on for drinking and bathing. Combined with the expected effects of climate-fueled heat and drought, it puts Louisiana on the brink of a groundwater crisis more common in Western states.

“Will restaurants no longer be able to put a giant glass of water on your table when you go in to have your seafood platter?” asks Craig Colten, a Louisiana State University professor who has studied water issues for years. “Will there be limits on how frequently you can wash your car in your driveway or water your lawn?”

Agriculture consumes more than 61% of Louisiana’s groundwater. In part, that’s because a centuries-old law gives landowners “ultimate dominion” over the groundwater beneath their property.

When it comes time to flood his rice fields in southwestern Louisiana, sixth-generation farmer Christian Richard just flips a switch. Within seconds, crystal clear water gurgles up a 120-foot well and shoots out a short spout, right into the field.

“I think that ultimately, rice will be grown in the areas where the water is the cheapest and the most readily available,” Richard says.

But the Chicot Aquifer he draws from is losing water faster than it can be replenished. It’s being overdrawn by about 350 million gallons a day. And that’s creating another threat: saltwater intrusion.

Overpumping reduces the downward pressure exerted by the aquifer’s fresh water, giving seawater from the Gulf of Mexico room to move in and fill the void. Aquifers in other parts of the state are also dealing with saltwater intrusion, but the Chicot’s proximity to the coast exacerbates the problem here, says Christine Kirchhoff, a national water resources management and policy researcher at the University of Connecticut.

“You might have a well that is functioning just fine now,” Kirchhoff says, “but once salt contaminates fresh water, it’s done. That’s it. You no longer have that well.”…