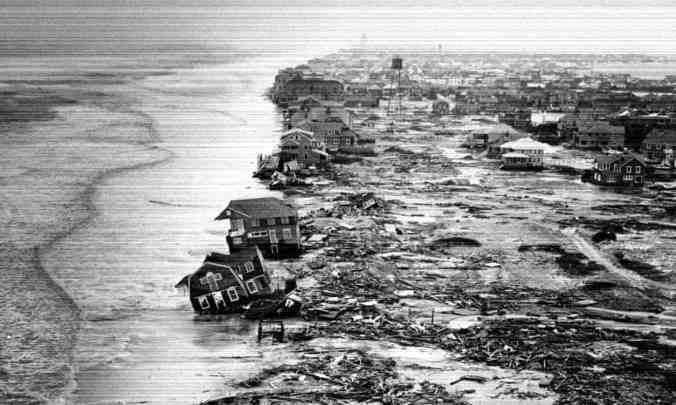 Homes destroyed by a storm in New York state in 1962. Photograph: Bettmann/Getty/Guardian Design

Yesterday’s link to a “winner” story is bookended by today’s long read about the “losers”–those who can read this–of the climate change game. Deniers of climate change come in many forms, but a common theme according to this detailed story is anti-regulatory zealotry. Deniers have won the major battles of public opinion for the last 60 years, while those ringing alarm bells on climate change may now be declared victors, if that is the right word, in the realm of reality versus opinion:

Sixty years of climate change warnings: the signs that were missed (and ignored)

The effects of ‘weird weather’ were already being felt in the 1960s, but scientists linking fossil fuels with climate change were dismissed as prophets of doom

In August 1974, the CIA produced a study on “climatological research as it pertains to intelligence problems”. The diagnosis was dramatic. It warned of the emergence of a new era of weird weather, leading to political unrest and mass migration (which, in turn, would cause more unrest). The new era the agency imagined wasn’t necessarily one of hotter temperatures; the CIA had heard from scientists warning of global cooling as well as warming. But the direction in which the thermometer was travelling wasn’t their immediate concern; it was the political impact. They knew that the so-called “little ice age”, a series of cold snaps between, roughly, 1350 and 1850, had brought not only drought and famine, but also war – and so could these new climatic changes.

“The climate change began in 1960,” the report’s first page informs us, “but no one, including the climatologists, recognised it.” Crop failures in the Soviet Union and India in the early 1960s had been attributed to standard unlucky weather. The US shipped grain to India and the Soviets killed off livestock to eat, “and premier Nikita Khrushchev was quietly deposed”.

But, the report argued, the world ignored this warning, as the global population continued to grow and states made massive investments in energy, technology and medicine.

Meanwhile, the weird weather rolled on, shifting to a collection of west African countries just below the Sahara. People in Mauritania, Senegal, Mali, Burkina Faso, Niger and Chad “became the first victims of the climate change”, the report argued, but their suffering was masked by other struggles – or the richer parts of the world simply weren’t paying attention. As the effects of climate change started to spread to other parts of the world, the early 1970s saw reports of droughts, crop failures and floods from Burma, Pakistan, North Korea, Costa Rica, Honduras, Japan, Manila, Ecuador, USSR, China, India and the US. But few people seemed willing to see a pattern: “The headlines from around the world told a story still not fully understood or one we don’t want to face,” the report said…