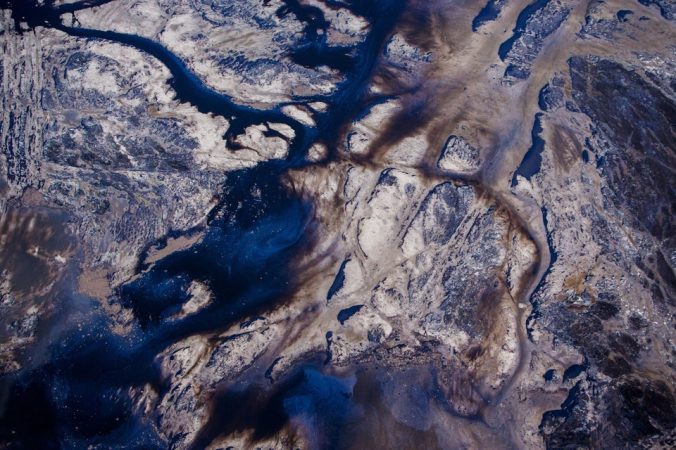 In a world that will need less oil, the attraction of going to a landlocked continental interior, such as Alberta, Canada, and trying to separate petroleum from sand is waning. Photograph by Ben Nelms / Bloomberg / Getty

Oil from the tar sands of Alberta will sink us faster than we are already sinking. How important is it to keep it where it is? Akin to some sort of holy grail. Thanks to Bill McKibben, as always, for weekly reminders to keep our eyes on the prize:

We Love You, Alberta—Just Not Your Tar Sands

If the province’s oil is dug up and burned, it will be calculably harder to limit the damage from climate change.

Some weeks ago, the government of Alberta wrote to me—and apparently to a number of other environmentalists and environmental groups. We are all subjects of an “anti-Alberta energy inquiry,” and have the right to respond to charges that are being levelled by a government commission. Alberta, it turns out, has spent three and a half million dollars in an effort to find out whether foreigners are unfairly targeting its oil-and-gas industry. I’m mentioned dozens of times in the draft report, due to be finished this week, and it contains links to lots of articles of mine explaining why the province’s vast tar-sands project should be curtailed.

It’s like getting a text from an old flame demanding to hear once again why you’ve broken up. The truth is, I’m not anti-Alberta in the least. I think that it’s one of the most beautiful places on the planet, from the ice fields above Jasper to the great delta of the Peace and Athabasca Rivers in Wood Buffalo National Park. I’ve lectured at its universities, hiked its trails, had Tegan and Sara high on my playlist. Lake Louise! Lake Minnewanka! The Calgary Stampede! Edmonton has the largest mall in North America. Calgary was once voted the world’s cleanest city, edging out Honolulu. What’s not to love?

But Alberta has an enormous amount of carbon beneath its soil. If it gets dug up and burned, then it will be calculably harder to limit the damage from climate change. The best estimate for economically recoverable oil in the province is about a hundred and seventy-three billion barrels. Burning that much, according to one calculation, would produce about a hundred and twelve billion tons of carbon dioxide, which is twenty-eight per cent of the world’s total remaining carbon budget if we want to have a fifty-per-cent chance (not a guarantee—a fifty-per-cent chance) of meeting the climate goals we set in Paris. Lay aside for the moment the devastation caused by mining the sludgy tar sands for oil. There’s no way that a country with less than one per cent of the world’s population can lay claim to more than a quarter of the atmosphere.

Alberta started feeling pressure with the battle over the Keystone XL pipeline, which would have run from the tar sands to the Gulf of Mexico. Indigenous people and Midwestern farmers and ranchers decried the damage to their lands and waters; many others (myself included) joined in to point out the damage that the pipeline would do to the climate. People went to jail, marched in huge numbers, and won: KXL won’t be built. In the process, the spotlight cast on the absurdity of the tar-sands project persuaded investors and oil companies around the world to start backing away. Some of the retreat was purely financial: in a world that will need less oil, the attraction of going to a landlocked continental interior and trying to separate petroleum from sand is waning. But some of it was in response to those efforts—banks and oil companies knew that the tar sands were in the spotlight.

This awareness-raising is what the government of Alberta considers unfair. North America has turned into what the Financial Post last week called a “graveyard of mega pipeline projects,” despite the government’s best efforts—it spent $1.3 billion trying to keep KXL alive. And it has struck back not just at environmentalists but at other parts of Canada: Alberta’s former premier, for instance, organized a boycott of British Columbia wine after that neighboring province asked for a review of the oil-spill risk associated with another tar-sands-pipeline project. Various Alberta leaders have regularly threatened to secede, a “Wexit” strategy (a reference to western Canada) that apparently Ottawa takes seriously enough to have invested at least fifteen billion taxpayer dollars in yet another pipeline to the Pacific. Alberta seems to think that it has been singled out for opposition. But the same groups—such as 350.org, which I helped found—that fight tar-sands oil have fought just as hard against Australian coal and American fracking, against pipelines that carry Dakotan oil or terminals that would export Appalachian natural gas, and against pipelines across Europe and Africa. The atmosphere can’t distinguish Canadian carbon from any other kind; it all heats the planet.

You’d think that the government of Alberta would be grateful. Temperatures are soaring across the province; just three years ago, after a record heat wave, an astonishing wildfire forced the evacuation of all eighty thousand people in Fort McMurray, the center of the tar-sands complex. This month, meteorologists reported that lightning strikes across the region were ten times higher compared with a year before—seven hundred and ten thousand within a single day, as more water vapor in the hot air led to fiercer thunderstorms. “It’s comparable to what you would typically see on some of the bigger lightning days in really lightning-prone regions of the United States, like Texas or Oklahoma,” an expert explained. Plenty of Albertans know that the planet is heating up—in 2019, thousands of them joined Greta Thunberg at a climate rally in Edmonton—but government and industry can’t seem to escape from the dream that their oil boom could just keep going. In fact, they have proposed building a new export terminal in the Arctic Ocean, the ice in which is rapidly melting.

This kind of fight will keep going on around the world, as one region after another realizes that environmental sanity requires it to keep its fossil fuels in the ground. Alberta—highly educated, and blessed with sun and wind—is in a far better position than most places to pivot to a new economy, and indeed there are signs that shift is beginning. But it won’t be easy psychologically. Hence the three-and-a-half-million-dollar investment into the anti-Alberta inquiry, not to mention a thirty-million-dollar government “war room” to counter attacks on the oil-and-gas industry, last seen waging a battle against a Netflix cartoon called “Bigfoot Family.”

Government of Alberta: nobody hates you. It’s just that we can all do the math.