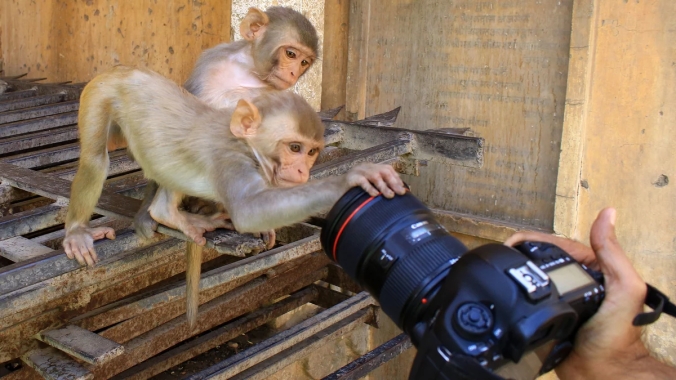 Macaques check out a camera in Galtaji Temple in Jaipur, India. Monkeys have been known to sneak into swimming pools, courts and even the halls of India’s Parliament. One attorney told author Mary Roach about a macaque that infiltrated a medical institute and began pulling out patient IVs. Vishal Bhatnagar/NurPhoto via Getty Images

This conversation with the author Mary Roach is plentiful with surprises about the human-animal interface, occasionally unfortunate and sometimes hilarious: 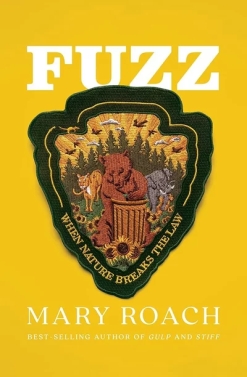 Animals living among us often ignore the rules we try to impose on them. Science writer Mary Roach experienced this firsthand when a group of macaque monkeys accosted her in India.

“I was kind of asking for it,” Roach admits. “I walked up this trail where I knew there were a lot of macaques, and I walked up holding a bag of bananas.”

At first, nothing happened. Then Roach saw a monkey pop its head up from behind a boulder, “kind of like the bandits waiting for the stagecoach.” Just as that monkey stepped into her path, another monkey darted up behind her and snatched the bag of bananas.

“I don’t know if they were a team, like ‘I’ll distract her and you grab the bananas,’ … or whether they were competing bandits,” she says. “But anyway, I got mugged.”

Roach reports that the monkeys’ mischief extends beyond bananas. Macaques have been known to sneak into swimming pools, courts and even the halls of India’s Parliament. One attorney told Roach about a macaque that infiltrated a medical institute and began pulling out patient IVs.

“If somebody was getting, you know, a glucose drip, [the monkey would] suck on the needle like it was a Popsicle,” she says…

Read, or listen, to the whole conversation here.