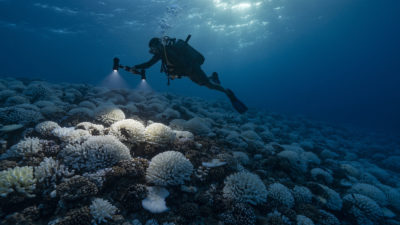 When someone offers to point out bright spots on anything in the natural world, we are all ears. When the author is Nicola Jones, all the more:

The first-ever report on the world’s coral reefs presents a grim picture, as losses mount due to global warming. But there are signs of hope — some regions are having coral growth, and researchers found that corals can recover if given a decade of reprieve from hot water.

When ecological genomicist Christian Voolstra started work on corals in Saudi Arabia in 2009, one of the biggest bonuses to his job was scuba diving on the gorgeous reefs. Things have changed. “I was just back in September and I was shocked,” says Voolstra, now at the University of Konstanz in Germany. “There’s a lot of rubble. The fish are missing. The colors are missing.”

It’s a sad but now familiar story. Earlier this month, the Global Coral Reef Monitoring Network released the first-ever report collating global statistics on corals, documenting the status of reefs across 12,000 sites in 73 countries over 40 years. Overall, they report, the world has lost 14 percent of its corals from 2009 to 2018 — that’s about 11,700 square kilometers of coral wiped out.

“If this had happened to the Amazon, if overnight it had turned white or black, it would be in the news everywhere,” says Voolstra. “Because it’s underwater, no one notices.”

Corals are facing tough times from global warming: Prolonged marine heat waves, which are on the rise, cause corals to expel their symbiotic algae (called zooxanthellae), leaving the bleached corals weak and vulnerable. Local pollution continues to be a problem for corals, but global warming is emerging as the predominant threat. In 2018, the International Panel on Climate Change reported that 1.5 degrees Celsius of global warming would cause global coral reefs to decline by 70-90 percent (warming currently stands at 1.2 degrees C). A 2-degree C warmer world would lose more than 99 percent of its corals…