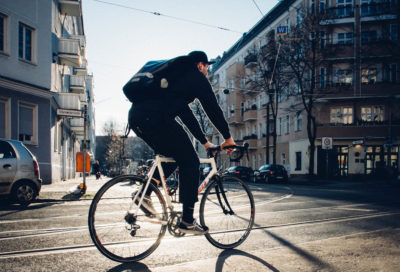 A cyclist in Berlin, Germany. HENDRIK WIEDUWILT VIA FLICKR

Thanks to Yale E360 for Berlin Looks to Create Car-Free Zone Larger Than Manhattan, a snapshot of the city’s fewer cars campaign, with links to further details in related stories by the Guardian and Fast Company:

Berlin’s regional parliament is considering creating a car-free zone in the German capital in response to a concerted push from a local advocacy group. The car ban would apply to the space ringed by the S-Bahn train line, which circles the city center, an area larger than Manhattan.

Volksentscheid Berlin Autofrei, or People’s Decision for Auto-Free Berlin, the group behind the measure, was started in 2019 by a group of friends who worked with pro bono lawyers to draft a new law that would restrict vehicle use to trucks, taxis, emergency vehicles, and limited car-sharing programs. The group then collected 50,000 signatures in support of the measure, forcing the Berlin Senate to take up the issue next month, Fast Company reported.