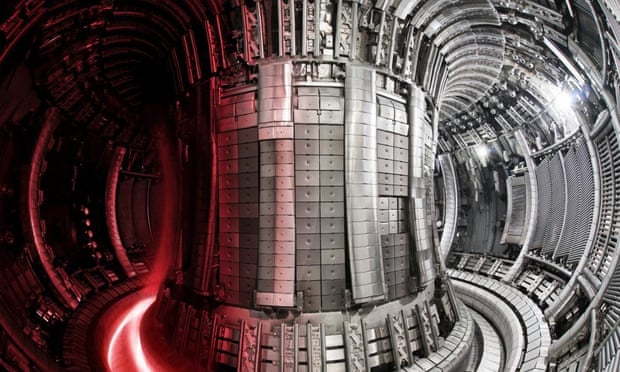 The interior of the JET, where an experiment generated 59 megajoules of heat, beating the 1997 record of 21.7 megajoules. Photograph: UKAEA

We have no expertise in this specific energy-related subject, but we know that new sources of energy are an important potential contributor to the reduction of global warming. So, we read this news about a new heat record from nuclear fusion as a qualified source of hope:

The prospect of harnessing the power of the stars has moved a step closer to reality after scientists set a new record for the amount of energy released in a sustained fusion reaction.

Researchers at the Joint European Torus (JET), a fusion experiment in Oxfordshire, generated 59 megajoules of heat – equivalent to about 14kg of TNT – during a five-second burst of fusion, more than doubling the previous record of 21.7 megajoules set in 1997 by the same facility.

The feat announced on Wednesday follows more than two decades of tests and refinements at the Culham Centre for Fusion Energy and has been hailed as a “major milestone” on the road to fusion becoming a viable and sustainable low-carbon energy source.