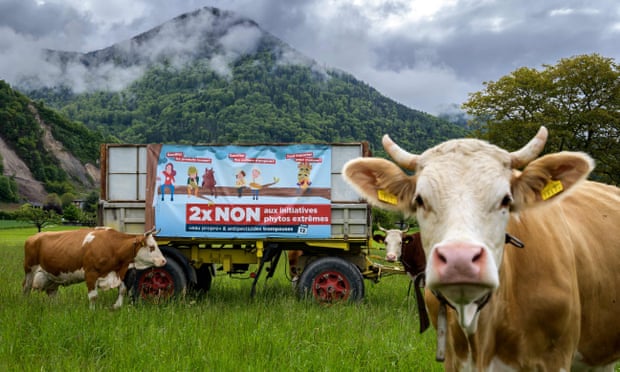 An electoral poster objecting to a proposed ban on subsidies for Swiss farms. A 2021 report found almost 90% of global farming subsidies are harmful. Photograph: Fabrice Coffrini/AFP/Getty

We missed this when it was first published a couple weeks ago, but it is still fresh and important:

The world is spending at least $1.8tn (£1.3tn) every year on subsidies driving the annihilation of wildlife and a rise in global heating, according to a new study, prompting warnings that humanity is financing its own extinction.

From tax breaks for beef production in the Amazon to financial support for unsustainable groundwater pumping in the Middle East, billions of pounds of government spending and other subsidies are harming the environment, says the first cross-sector assessment for more than a decade.

This government support, equivalent to 2% of global GDP, is directly working against the goals of the Paris agreement and draft targets on reversing biodiversity loss, the research on explicit subsidies found, effectively financing water pollution, land subsidence and deforestation with state money.

The authors, who are leading subsidies experts, say a significant portion of the $1.8tn could be repurposed to support policies that are beneficial for nature and a transition to net zero, amid growing political division about the cost of decarbonising the global economy.

The report calls for governments to agree a target to eradicate environmentally harmful subsidies by the end of the decade at the biodiversity Cop15 gathering in China later this year, where it is hoped a “Paris agreement for nature” will be signed, and for companies to reveal the subsidies they receive as part of environmental disclosure reporting.

Christiana Figueres, who was head of the UN climate change convention when the Paris agreement was signed, welcomed the research. She said the subsidies were creating huge risks for the businesses receiving them…