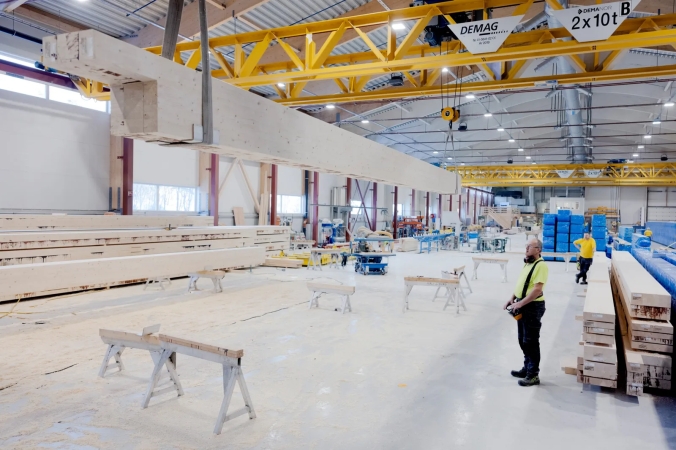 At a warehouse in Moelv, Norway, glulam—short for “glued laminated timber”—an engineered product in which pieces of lumber are bound together with water-resistant adhesives, is manufactured at industrial scale.

The re-emergence of building at large scale with wood has challenged my intuition in recent years. It is not only the carbon logic that needs explanation, but the structural engineering and fire-safety. In this article Rebecca Mead does the math, in elegant prose, and quite convincingly:

In Scandinavia, ecologically minded architects are building towers with pillars of pine and spruce. 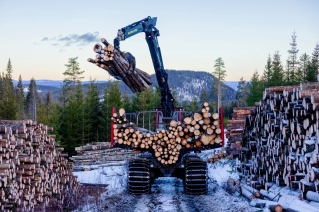 The timber for Mjøstårnet was harvested from the forests that blanket about a third of Norway’s landmass.

Brumunddal, a small municipality on the northeastern shore of Lake Mjøsa, in Norway, has for most of its history had little to recommend it to the passing visitor. There are no picturesque streets with cafés and boutiques, as there are in the ski resort of Lillehammer, some thirty miles to the north. Industrial buildings, mostly for the lumber industry, occupy the area closest to the lake, and the waterfront is cut off by a highway. The town, which has a population of eleven thousand, was until recently best known to Norwegians for a series of attacks on immigrant residents three decades ago, which led to street clashes between anti-racism protesters and supporters of the far right. Since 2019, however, Brumunddal has achieved a more welcome identity: as the site of Mjøstårnet, the tallest all-timber building in the world.

Mjøstårnet—the name means “Tower of Mjøsa”—stands at two hundred and eighty feet and consists of eighteen floors, combining office space, residential units, and a seventy-two-room hotel that has become a destination for visitors curious about the future of sustainable architecture and of novel achievements in structural engineering. It’s the third-tallest tower in Norway, a country whose buildings rarely extend above ten stories. Although Mjøstårnet dominates the Brumunddal skyline, it is a tenth the height of the world’s tallest structure, the Burj Khalifa, in Dubai. Its scale is similar to that of New York’s Flatiron Building, which, when completed in 1902, topped out at just over three hundred feet. (Three years later, it was capped with a penthouse.)

Like the Flatiron Building—one of the earliest steel-frame skyscrapers, which defied public skepticism about the sturdiness of a building that tapers to the extreme angle of about twenty-five degrees—Mjøstårnet is an audacious gesture and a proof of concept. It depends for its strength and stability not on steel and concrete but on giant wooden beams of glulam—short for “glued laminated timber”—an engineered product in which pieces of lumber are bound together with water-resistant adhesives. Glulam is manufactured at industrial scale from the spruce and pine forests that cover about a third of Norway’s landmass, including the slopes around Brumunddal, from which the timber for Mjøstårnet was harvested.

I went to see the building in mid-December, arriving by a train from Oslo that passed through farmland and woodland before reaching the edge of Lake Mjøsa, which is Norway’s biggest. The steely waters lapped a shoreline of charcoal-colored rock, on which traces of the previous weekend’s snow remained. The forested bank opposite, when it emerged from clouds of fog, was dark green against the pallid sky. The journey north from the capital takes about an hour and a half, but I didn’t need a watch to tell me when I had arrived at Brumunddal—the incongruous sight of a tower block rising from the water’s edge was a sufficient signpost. Descending from the train, I wheeled my suitcase for fifteen minutes across town—past the parking lot of the local McDonald’s and across the highway, which was nearly empty. As I walked, Mjøstårnet loomed in the mist, resembling from a distance a box of matches. On the roof, there was an angled wooden canopy that might have been fashioned from a handful of matches taken from the box’s drawer…