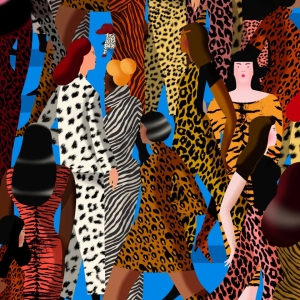 It is difficult to judge from Rebecca Mead’s article Should Leopards Be Paid for Their Spots whether and how the idea has a practical future, although the exemplary collaboration between Panthera and Hermes has allure. The concept has plenty of merit, from my vantage point 26 years into an entrepreneurial career that shares some common ground.

If travelers are willing to pay a premium to support the conservation of a place; if they buy things to take home because those things support artisans and farmers; and continue to buy the coffee when back home because it funds bird habitat regeneration (customers tell me via email that in addition to the coffee being excellent, this is a motivator), then why not this too:

Style-setters from Egyptian princesses to Jackie Kennedy to Debbie Harry have embraced leopard prints. Proponents of a “species royalty” want designers to pay to help save endangered big cats. 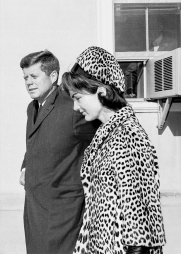 Jacqueline Kennedy, in 1962. Photograph from Getty

When Jacqueline Kennedy was living in the White House, in the early sixties, she relied upon the taste of Oleg Cassini, the costume designer turned couturier, to supply her with a wardrobe that would befit her role as First Lady, one of the most photographed women in the world. In 1962, Cassini provided her with a striking leopard coat. Knee-length, with three-quarter sleeves and six buttons that fastened across the chest, the coat was not made from a synthetic leopard-patterned fabric. Rather, it consisted of the pelts of several formerly wild, living leopards, which had been hunted and slaughtered for their alluring, treacherous skins. Fashion-wise, the garment was a great success: the demand for Jackie-style leopard coats soared. For leopards, the trend was a disaster. It has been estimated that a quarter of a million leopards died to satisfy consumers wanting to dress like Jackie. A decade after Cassini made the First Lady’s coat, the U.S. government placed leopards on the endangered-species list, making it illegal to import their skins.

It is an irony of nature that although the leopard’s spots—or, more accurately, rosettes—evolved as a form of camouflage, the same characteristics that allow leopards to lurk unseen by their prey in a dappled forest or on a dusty savanna render the creature’s hide irresistibly eye-catching to human observers. Leopard skin has been repurposed as prestigious clothing for humans for millennia, notably by the ancient Egyptians, for whom feline characteristics were linked with aspects of divinity: Bastet, a goddess associated with femininity and a protector of the home, was represented as a woman with the head of a lioness. An Egyptian stela dating from more than four and a half thousand years ago, now in the collection of the Louvre, depicts the Princess Nefertiabet dressed in what looks like elegant contemporary evening wear. Seated, she is clad in a slim, ankle-length sheath spotted with the rosettes of a leopard. The garment may be made from the skin of a leopard, but it may also be trompe-l’oeil: the Egyptians not only wore leopard pelts but also painted linen with spots to resemble them, or wove the pattern into woollen fabric, according to Shannon Bell-Price and Elyssa Da Cruz, the authors of an essay in “Wild: Fashion Untamed,” a publication to accompany a show that opened in 2004 at the Metropolitan Museum of Art. Bell-Price and Da Cruz note that the representation of a fringe on the bottom of a garment is a telltale sign that it is definitively faux, not fur.

This cognitive split between species and pattern—between the leopard and its spots—has lately become the subject of academic study, with conservation-minded scholars analyzing data generated by fashion trends. Caroline Good Markides, formerly a research fellow in the Department of Zoology at Oxford University’s Wildlife Conservation Research Unit, did not set out to be an advocate for animals; her background is as an art historian, with a focus on British art of the late-seventeenth and early-eighteenth century. In her doctoral research, she examined the then emergent genre of still-life painting, or “dead-standing things,” as such works were first characterized in English in the middle of the seventeenth century. At the Wildlife Conservation Research Unit, which Good Markides joined early in her career, her work involved exploring the cultural significance of representations of endangered wildlife in art. One day, during a staff discussion about the plight of lions, several colleagues remarked on the difficulty of engendering interest in them in Britain, given that lions are not native to the country.

“I was thinking about it afterward, and I realized that, actually, there are lions everywhere,” Good Markides told me recently. There are the three heraldic lions passant guardant—striding, with heads turned toward the viewer—that have been included on the royal arms of England since the late twelfth century. There are the four bronze lions reclining on pedestals at the foot of Nelson’s Column, in Trafalgar Square, a feature of the cityscape since the eighteen-sixties. There are the three lions emblazoned on the English soccer team’s shirt and celebrated in the chart-topping anthem of the sport in England, “Three Lions (Football’s Coming Home)”; a crowned lion is the emblem of the Premier League, the U.K.’s top-tier soccer league. Even British eggs have lions on them, stamped with the image of the beast as a quality seal since the late nineties. Despite lions having died out in Britain more than twelve thousand years ago, the creature still has a charged symbolic power—one that could be harnessed, Good Markides speculated, to the benefit of lions themselves…