One of the minor downsides to life in the tropics is decades of missed autumn leaves. But that downside is counterbalanced by so many upsides that the loss is trivial. And we have photos like the one to the right, as well as the possibility of travel (including to the botanical gardens featured in the story below), plus plenty of writing on the science of those colors, to dissipate the trivia.

Mr. Roddick is often asked to open up a tree’s canopy to let in more light. His answer is based on the tree’s species, its health and its age. “Better to train a young tree to fit into a garden as opposed to trying to change an old tree,” he said. Michael Stewart/Courtesy Brooklyn Botanic Garden

Besides, our trees are awesome for reasons other than color. They grow fast. Some of them fix nitrogen. And most of those we have been planting have a shading responsibility specific to the coffee we are planting. So this article resonates even if some of the particulars are not relevant to our land, trees, and related growing conditions. Margaret Roach has been a constant companion reminding me of all this, through her writings mainly on gardens in the north. 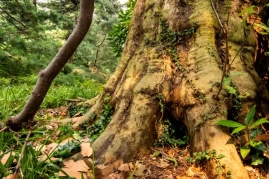 In Your Enthusiasm for Planting, Don’t Forget About the Trees

Trees can take a lot of punishment, but they have their limits. Here’s how to work around them safely.

If trees could talk, they’d probably start by saying, “Enough with the insults already.”

In more than 30 years of working with trees, Christopher Roddick has made it a practice to listen to their unspoken language — and to show respect for some of the largest and oldest organisms among us.

Mr. Roddick is the head arborist and foreman of grounds at Brooklyn Botanic Garden, a post he is leaving this summer, when he and his wife, Rebecca McMackin, the director of horticulture at Brooklyn Bridge Park, move north. Their first stop: a fellowship she is doing at Harvard.

But Mr. Roddick won’t forget the trees at the botanic garden — old friends, by now — and what they have taught him. Especially about how we oblivious humans expect them to adapt to our garden-making and home improvements, rather than the other way around. Too often, we don’t take into account in the needs of our trees.

“As an arborist, I usually don’t get the call until a tree is in trouble,” he said. “And I ask, ‘Has anything changed around it?’”

At first, the answer is almost always “No” — and then something like, “Well, we put the patio in nearby. But that was five years ago.”…