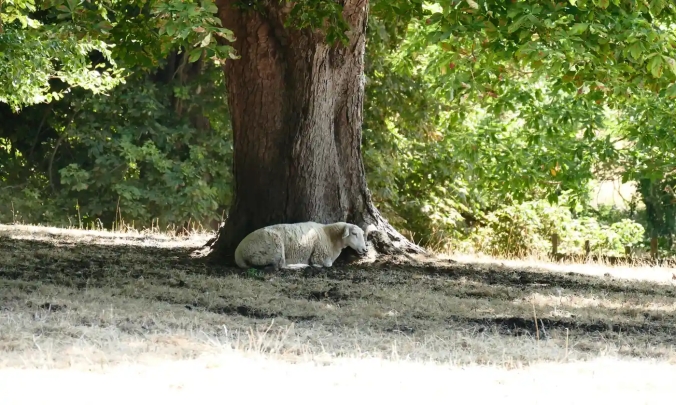 A sheep rests under a tree in Oxfordshire. Trees planted for biodiversity also supply shade for livestock. Photograph: Geoffrey Swaine/Rex/Shutterstock

There is no photo of the olive trees mentioned in this article, but we will take the Helena Horton’s word for it, preposterous as it sounds:

Soil healing and olive growing: how UK farms are coping with looming drought

Across the UK, farmers are looking at the sky and begging for rain.

Some areas of southern England, where much of the country’s food is grown, have not had any significant rainfall since June. This has put huge pressure on this year’s harvest but things next year could be even worse. The soil in much of the country is too dry to drill, and many crops for harvest later this year and next year need to be drilled by the end of October to be viable.

Livestock are being fed winter stocks of hay now, because the grass has dried up and there is nothing for them to eat – raising fears they will have to be slaughtered early in winter when food runs out.

The amount of water needed for crops this year has also increased due to the lack of rain, so farmers have been emptying reservoirs. Statistics from the UK Centre of Ecology and Hydrology show that in order for rivers and reservoirs to get to normal levels by next year, above average rainfall is needed for months in a row.

Martin Lines, the UK chair of the Nature Friendly Farming Network, grows mostly winter cereals on his Cambridgeshire farm. He said: “We are seeing the impacts of the drought on our spring crops we are harvesting at the moment and a reduced crop yield. Many farmers growing vegetables are running out of water and seeing crops’ potential being lost…