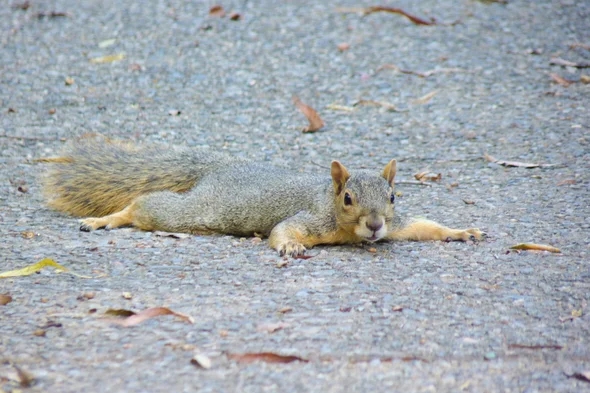 Funny as it sounds, it is worth considering how animals deal with heat:

During a Heat Wave, You Can Blast the AC, but What Does a Squirrel Do?

Although recent spikes in temperature affect all of us, our urban critters have had to find their own ways to beat the heat. Sometimes they “sploot.”

It’s summertime in New York City–birds are chirping, insects are scurrying, and everything feels alive! While recent heat waves have pushed a lot of us indoors to the respite of air conditioning, the critters of this city were left to fend for themselves.

Sunny Corrao: Many would be surprised that they’re going to be doing the same exact things that most humans are doing… they’re not going to be pushing it, they’re gonna be taking their time and seeking those, you know, shadier spots in the park.

Corrao: I work with the New York City Parks Department as part of our wildlife unit, a small but mighty team that focuses on how New Yorkers can coexist with wildlife in an urban environment.

Papp: From the birds and squirrels, to raccoons and even the turtles–here’s how urban wildlife is responding as the mercury rises. Let’s start with the birds.

Corrao: Obviously, there are a lot of different species of birds that can be found all across the city, from your pigeons, to your larger birds of prey. And what’s interesting about birds is they don’t sweat through their skin, like humans and other mammals do.

Papp: Instead, birds lose heat through exposed skin–which, if you think about the last time you saw a bird in Prospect Park, there really isn’t much exposed aside from their feet, legs, and beak. Sometimes, when temps really spike, birds can pant–kind of a like a dog–to get rid of their excess heat. Ultimately, these tactics help but usually aren’t enough during a heat wave. So …

Corrao: They’ll find everything from a little puddle from a recent rainstorm … Or maybe the hydrants that are opened down the street, to fountains and even the spray showers in our playgrounds across the city. You can find birds that will be seeking refuge in the water to kind of help cool off.

Papp: Aquatic turtles can almost always be found near the ponds and lakes of our urban sprawl. On a normal day, you might spot a small stack of turtles near the water. This is because they’re ectotherms, meaning their bodies rely on external things for heat. Piling on top of one another, or on a warm rock’s surface, helps to keep the turtle’s core body at a healthy temp. When things get too hot, like during NYC’s recent heat wave, they change their behavior a bit. Instead, they head into the water and spread out…