Solar panels installed near the Heart-Butte schools in Montana. Janie Osborne for The New York Times 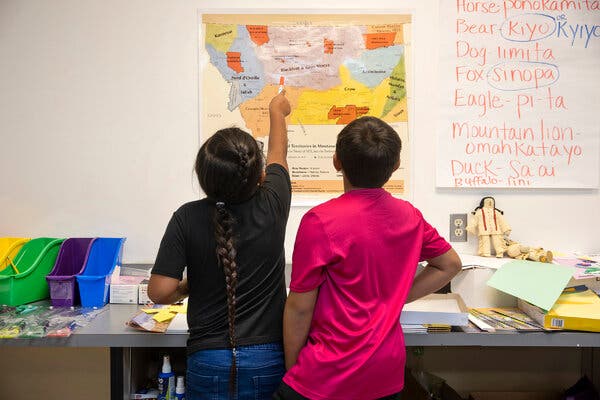 Students at Heart-Butte School exploring their area of the world on a map in the “Blackfeet Immersion” classroom. Janie Osborne for The New York Times

In the USA it has become normal to think that partisan divisions prevent collaboration on issues of common interest. The partisan divisions are real, and then some; but there are silver linings here and there.  Cara Buckley, a climate reporter, continues to demonstrate a talent for finding cases where communities benefit from collective action in the act of taking better care of the environment: 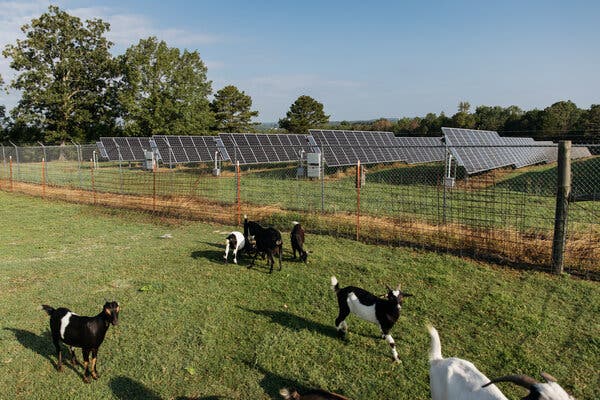 Goats cared for by Batesville High School’s 4-H students, next to the school’s solar panels. “If you’re conservative, we didn’t ask you for more taxes, if you’re liberal, you love the green concept,” Dr. Hester said. Terra Fondriest for The New York Times

Facing Budget Shortfalls, These Schools Are Turning to the Sun

Public schools are increasingly using savings from solar energy to upgrade facilities, help their communities, and give teachers raises — often with no cost to taxpayers.

One school district was able to give pay raises to its teachers as big as 30 percent. Another bought new heating and ventilation systems, all the better to help students and educators breathe easier in these times. The improvements didn’t cost taxpayers a cent, and were paid for by an endlessly renewable source — the sun. 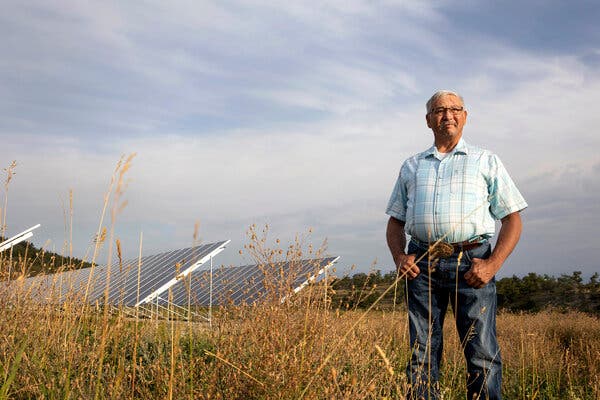 Mike Tatsey, superintendent of schools in Heart-Butte, believes that freeing up extra money for staples like groceries and shoes could have a ripple effect in classrooms. Janie Osborne for The New York Times

As solar energy gains traction across the country, one beneficiary have been schools, particularly those in cash-strapped districts contending with dwindling tax bases.

From New Jersey to California, nearly one in 10 K-12 public and private schools across the country were using solar energy by early 2022, according to data released Thursday by Generation180, a nonprofit that promotes and tracks clean energy. That’s twice as many as existed in 2015.

The savings in electric bills from schools with solar panels often topped millions in each district, and many have been able to adopt the technology without shouldering any costs up front.

“If you’re conservative, we didn’t ask you for more taxes, if you’re liberal, you love the green concept,” said Michael Hester, the school superintendent in Batesville, Ark., where solar arrays paid for teacher raises. “It’s a win-win.”

In Heart-Butte, Mont., the school superintendent, Mike Tatsey, arranged for three-quarters of the energy credits generated by the district’s new solar panels to help lower the electric bills of households in the community, located on the Blackfeet Indian Reservation. He believed that freeing up extra spending money for staples like groceries and shoes could have a ripple effect in classrooms.

“That little bit, in my mind, might help a family feel better about themselves, and kids feel better themselves,” Mr. Tatsey said. “In a roundabout way, when they come to school, because of that little bit of extra hope we’re able to give, they’ll be ready to learn.”…

One thought on “Solar@School, Win-Win-Win”