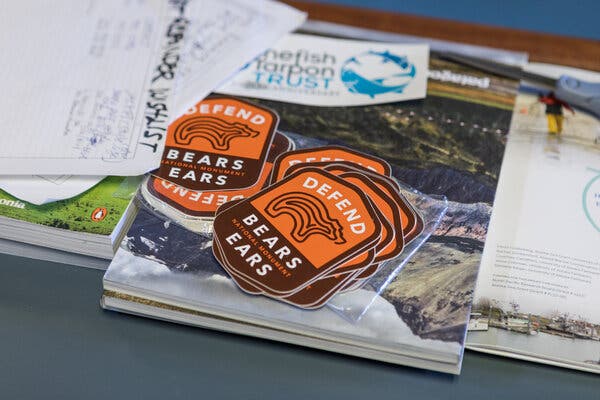 Patagonia has become more politically active, going so far as to sue the Trump administration in a bid to protect the Bears Ears National Monument. Laure Joliet for The New York Times

We have mentioned this company multiple times in our pages over the years, because we take inspiration from it, the same way we have taken inspiration from the example set by Chuck Feeney. It is worth noting that I also value everything I have ever bought from Patagonia. The day of this blizzard in New York I took an old beat up backpack in to see if they could repair it in the nearby shop; instead, they gave me a new one.

Good quality products, combined with good service, make the good environmental values of the company all the better:

“Hopefully this will influence a new form of capitalism that doesn’t end up with a few rich people and a bunch of poor people,” said Mr. Chouinard. Meridith Kohut for The New York Times

Billionaire No More: Patagonia Founder Gives Away the Company

Mr. Chouinard filmed an announcement for his employees at home in Wyoming. By giving away the bulk of their assets during their lifetime, the Chouinards have established themselves as among the most charitable families in the country. Natalie Behring for The New York Times

A half century after founding the outdoor apparel maker Patagonia, Yvon Chouinard, the eccentric rock climber who became a reluctant billionaire with his unconventional spin on capitalism, has given the company away.

Rather than selling the company or taking it public, Mr. Chouinard, his wife and two adult children have transferred their ownership of Patagonia, valued at about $3 billion, to a specially designed trust and a nonprofit organization. They were created to preserve the company’s independence and ensure that all of its profits — some $100 million a year — are used to combat climate change and protect undeveloped land around the globe.

The unusual move comes at a moment of growing scrutiny for billionaires and corporations, whose rhetoric about making the world a better place is often overshadowed by their contributions to the very problems they claim to want to solve.

At the same time, Mr. Chouinard’s relinquishment of the family fortune is in keeping with his longstanding disregard for business norms, and his lifelong love for the environment.“

Hopefully this will influence a new form of capitalism that doesn’t end up with a few rich people and a bunch of poor people,” Mr. Chouinard, 83, said in an exclusive interview. “We are going to give away the maximum amount of money to people who are actively working on saving this planet.”…