Blake Votilla at the top of a spruce tree, collecting cones that will be replanted to help restore forests decimated by wildfires.

Thanks to Hilary Swift (last seen in these pages as a photographer, now also as a writer) and the New York Times for this series:

In Utah, Restoring Spruce Forests One Cone at a Time

Seasonal workers climb tree after tree to collect seeds that will eventually help regrow forests, an effort that could get the country closer to its climate goals 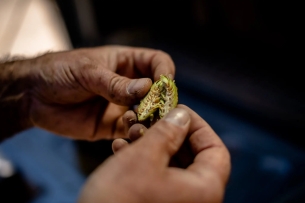 Some of the cones collected get sent to a nursery outside of Boise, Idaho, where the seeds from the cones are stored or replanted.

MOAB, Utah — Blake Votilla stared up at the 120-foot spruce tree. He strapped braces with four-inch spurs to his shins and clipped two large red plastic sacks on his climbing harness. Reggaeton blasted from a portable speaker on his hip.

Then he embraced the tree with his gloved hands, sticky from sap, lifting his left leg up first, driving the spur into the cracks of the bark to hoist himself up.

Mr. Votilla, 30, was here in the Manti-La Sal National Forest, which covers stretches of Utah and Colorado and is known for its Engelmann spruce trees, as part of a federal program that hires contractors to climb the trees and collect their cones. The seeds from the cones are sent around the country and ultimately get planted to regrow forests that have been decimated by wildfire or deforestation. These efforts have become more urgent at a time when the rate and intensity of forest fires have increased and the country is attempting to meet ambitious climate goals.

“I think it’s one of the most important things we could be doing right now,” said Patrick Murphy, a forest ecologist for the U.S. Forest Service, “especially with all the large-scale fires that have been going on and the backlog of reforestation that’s needed.”

This fall, I made the drive to Manti-La -Sal from Moab, Utah — an outdoor lover’s mecca famous for its red rocks and canyons — to document the collection process. The forest is one of many areas in the western United States where cones are collected. When trees are replanted after a wildfire, officials typically choose trees that are as close to what was originally there to help maintain the natural ecosystem. The workers travel around, rotating through forests seasonally, similar to crop rotation…