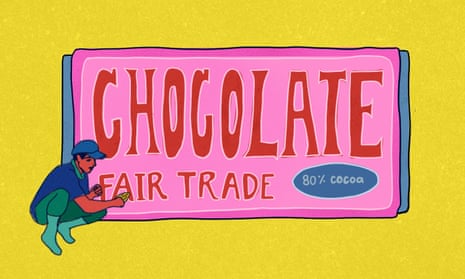 ‘The only way to ensure that money is going into a farmer’s pocket is to buy directly from farmers.’ Illustration: Rita Liu/The Guardian

We have been avid readers on the topic of chocolate for almost as long as we have been sharing articles on this platform:

The sweet spot: is ethical and affordable chocolate possible?

Is it possible to make an ethical chocolate bar that’s also affordable? Tim McCollum, the founder of the bean-to-bar chocolate brand Beyond Good, says the answer is yes – but you have to transform the way it’s made.

Beyond Good produces single-origin chocolate bars from cocoa sourced in Madagascar, an island nation off the eastern coast of Africa. Like other specialty chocolate brands, the company says it has sought to improve farmer livelihoods by curtailing the long chain of middlemen that typically participate in the trade of cocoa. Unlike most others, though, Beyond Good says it has managed to eliminate intermediaries altogether: the company buys its cocoa beans direct from local farmer co-ops and drives them to its manufacturing facility in Antananarivo, Madagascar’s capital.

McCollum says that transacting directly with farmers, coupled with the savings of manufacturing in a lower cost environment, means that Beyond Good can pay farmers a premium while selling its single-origin chocolate bars for $4 a piece, less than half the cost of a bar from US-based competitors like Dandelion and Ritual. That more modest price point has allowed Beyond Good to move beyond the Whole Foods chocolate shelf and sell its products at mainstream retailers like Costco and Albertsons…