Teela Magar and Cing Neam prepare roti dough as part of Edible Alphabet, a program in Philadelphia that folds English lessons for immigrants to the U.S into a cooking class. PHOTO: Bastiaan Slabbers, The Salt

Roti is a staple in Indian homes. This unleavened flat bread made of stoneground wholemeal flour links tables in Asia and Africa. With its humble origins, simple spirit, and its versatility in being an economical yet nutritious accompaniment, the roti is a mainstay of an English-as-a-Second-Language class in Philapdelphia. So, how does breaking bread help immigrants pick up basics of English – a skill vital to their rehabilitation, assimilation, and survival in a foreign land? The Salt tells us:

“Food is warmth, it’s comfort, it breaks down those barriers.” Galeb Salman left his native Iraq 25 years ago and most recently lived in Thailand. He says he savors the choices and freedom he feels since arriving here in September with his wife and five kids. “When I think I want to learn, I want to study, I can. When I want to work, I can,” he says. “I feel we have good life now. …This is my new life.”

END_OF_DOCUMENT_TOKEN_TO_BE_REPLACED 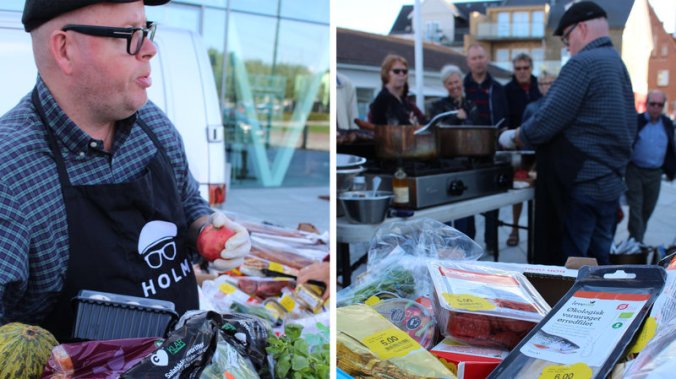 Claus Holm, a Danish celebrity chef, demonstrates at a festival on the Danish island of Fyn how expired products lurking at the back of the fridge can still be delicious. PHOTO: Sidsel Overgaard for NPR

By 2050, the world will need 60 per cent more calories per year to feed a projected population of 9 billion. Cutting the rate of global food loss and waste could help bridge this food gap while creating environmental and economic benefits. And the people of Denmark are already well ahead in the race to cut food waste. While the Stop Wasting Food movement is the national embodiment of a collective consciousness, the need to cut back on waste has seeped through the consumer chain, as NPR finds.  END_OF_DOCUMENT_TOKEN_TO_BE_REPLACED

Sun Woo directs the visitor program at Jinkwansa, a Buddhist temple outside Seoul famous for preserving the art of Korean temple food. Behind her are giant jars filled with fermented soybeans. PHOTO: Ari Shapiro/NPR

When it comes to faith matters, it’s interesting to see how matters of divinity are linked to food. One interpretation of it could be the need to connect the intangible with the tangible. And no better universal language than food as a medium to impart lessons for the soul. While most Hindu temples distribute prasad, churches have the Eucharist, Jewish rituals revolve around the seder meal and so on. The Buddhist temple at Jinkwansa too has a food tradition, one that goes back 1,600 years and is renowned for its detoxification power.

END_OF_DOCUMENT_TOKEN_TO_BE_REPLACED

One hundred of the first carts will be funded by MOVE and reserved for disabled veterans, and the remaining 400 will go to vendors who sign up—at no cost to them, because the pilot program will be sponsored. PHOTO: Today’s the Day I

Food carts are an iconic part of New York City’s street life. NYC has over 5,000 licensed trucks and carts, and an estimated 3,000 unlicensed ones on the streets. Cart operators, representing diverse ethnicities and cuisines, serve approximately 1.2 million customers every day. A food cart can be started with little capital and improved with sweat equity. However, until now, this industry has had no choice but to rely on smoke-spewing carts and their antiquated technologies that are dirty and unsafe. But hold on, the MRV100 is here.

Most food carts run off a diesel generator that’s designed to run only a few hours. Vendors run them for stretches of up to 14 hours, leading to a high output of greenhouse-gas emissions such as carbon monoxide, nitrous oxide, and particulate matter. You can see the smoke with the naked eye, but the hard facts are even more frightening: The research and consulting firm Energy Vision found that each cart produces the same amount of nitrous oxide as 186 cars on the road.

END_OF_DOCUMENT_TOKEN_TO_BE_REPLACED

Musician Sami Yaffa hits the right note at the table

We are people of experiences – the ones we’ve walked, run and barreled into and the ones we create. At RAXA, we take the latter seriously. So when you come down to stay with us by the Kochi harbour or navigate the world-renowned backwaters in our hand-stitched houseboats, you’ll see us work at crafting the finest and personal of them all. Bass guitarist Sami Yaffa and his partner, designer Mina Soliman will agree.

Their stay with us by the Mararikulam beach went beyond the comforts of their villas. There was definitely a stop by the kitchen because don’t we all travel the world plate by plate? Only that the plates and cutlery were on a little holiday of their own this time. A plantain (banana) leaf met the couple at the table and, well, they had to put their best hands forward. It was the call of the Sadya.

END_OF_DOCUMENT_TOKEN_TO_BE_REPLACED

Our group of four was greeted with “tender coconuts” to drink while we got settled into the boat and into our bedrooms. Our houseboat was over 100ft long with three bedrooms, a dining room, an upstairs lounge deck and all the amenities of a hotel (including AC), I was in awe. The outside was covered in a coconut palm woven shell tied together by coconut husk rope. Truly a product of “Kerala”, meaning “Land of Coconuts”. END_OF_DOCUMENT_TOKEN_TO_BE_REPLACED

Dum biryani is a baked rice dish layered with meat (chicken, mutton or beef ) that first originated in the Mugal cuisine of the 16 th -19 th centuries. It was a festive dish, costly to prepare and eaten mainly in the royal courts. Traditionally the biryani pots were sealed with dough before baking then cracked open at the table in a technique called Dum. END_OF_DOCUMENT_TOKEN_TO_BE_REPLACED 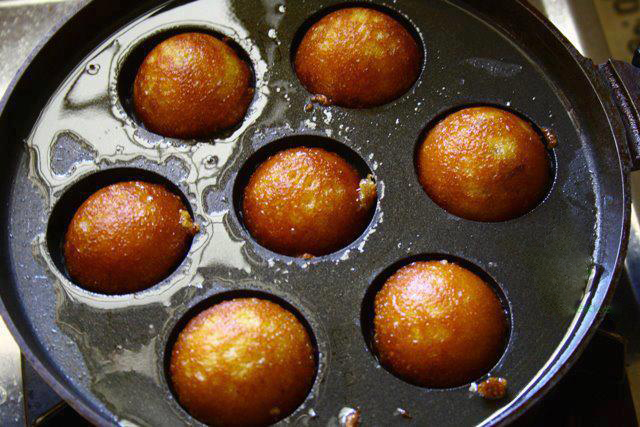 Unniappam is a traditional snack popular all over Kerala.  They are easy to make, very tasty, and are prepared from the main ingredients of rice, jaggery, banana, and ghee.

Mix rice powder, jaggery, chopped banana, fried coconut bits, and  cardamom powder for flavor, all with water to make the batter.  Then, heat the oil in an Unniappam pan and fill the holes with the batter. END_OF_DOCUMENT_TOKEN_TO_BE_REPLACED

Kerala cuisine is noted for the many snack items to be enjoyed, especially during tea time or in between major meals during the day. Banana Chips are a common example found throughout the state in any bake shop, snack shop or tea stall. They are are also included in the traditional Kerala sadya meal. END_OF_DOCUMENT_TOKEN_TO_BE_REPLACED

There is no written history as to when Halwa first came to Kerala but considering that it appears where Arab culture took root in matters of cuisine, this sticky sweet must have its origins in the Middle East. While Halwa is also native to many other parts of India, what is essentially different about the Kerala Halwa are the basic ingredients used. In other regions either wheat paste or white flour with sugar forms the base; here it is rice flour with jaggery, with the addition of cardamom, nuts and occasionally grated fruit or vegetable. END_OF_DOCUMENT_TOKEN_TO_BE_REPLACED 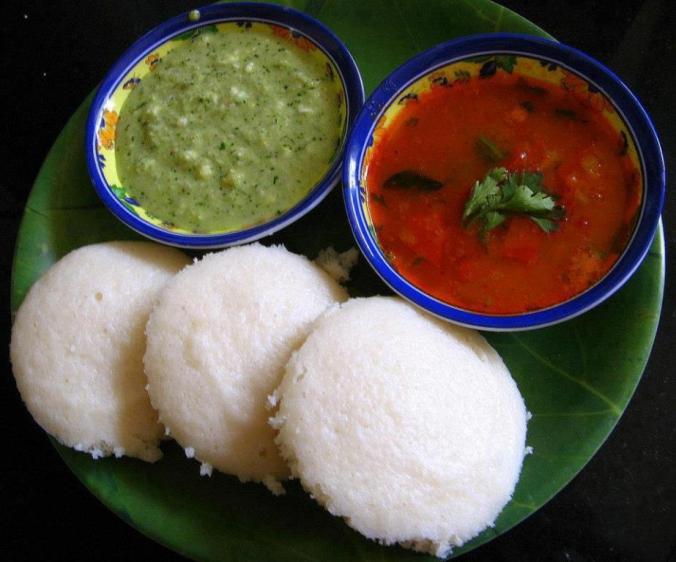 Idli is a South Indian savoury cake made by steaming a batter made with fermented rice powder, black gram dal and salt in a special pan with rounded indentations. Idlis are popular throughout India especially the southern part of the country. The dish is usually served with sambar and various chutneys, including tomato, coconut or coriander.

END_OF_DOCUMENT_TOKEN_TO_BE_REPLACED 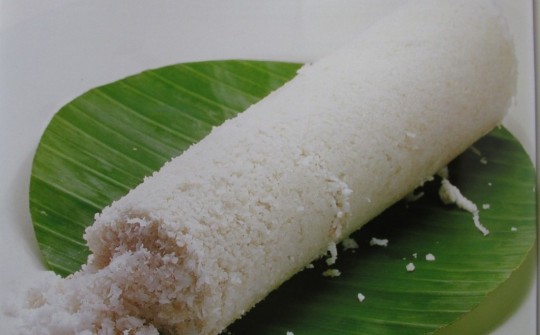 Puttu is a wonderful main dish for breakfast in Kerala. Easy to make and compatible with everything from ripe bananas to red fish curry this oil -free and healthy dish is made using a unique two piece vessel called a puttu – kudam and puttu- kutti. END_OF_DOCUMENT_TOKEN_TO_BE_REPLACED

Sambar is an example of a traditional South Indian spiced vegetable stew. It is a classic dish made with lentil and tamarind based broth, usually served with plain rice, Idli or Dosa, or an element in thali (banana leaf) meals. Each state of South India prepares it with a typical variation adapted to its culture and taste. END_OF_DOCUMENT_TOKEN_TO_BE_REPLACED

Mussels are abundantly found on the sea shores of Kerala especially the Malabar coast. The hard shell is removed and the mussels are cleaned well before cooking. END_OF_DOCUMENT_TOKEN_TO_BE_REPLACED

Chili.  Chili Pepper.  Capsicum.  Multiple monikers for a simple fruit in the nightshade family that has successfully colonized all cultures around the globe. 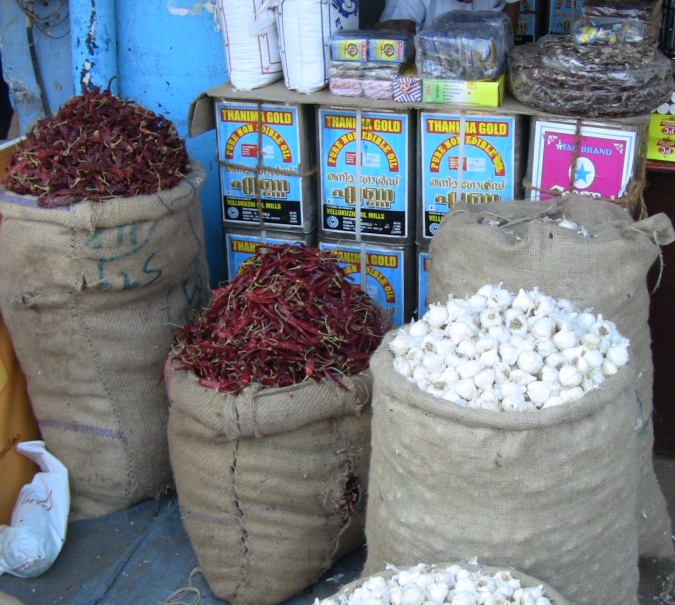 Chili Peppers and garlic at the Ernakulum Market, Cochin

This new world crop was part of the so called “Columbian Exchange”, using those newly opened passages to cross oceans and then continents.   Both the Spanish and the Portuguese had interests and influence across Asia and India, and these fiery fruits were quickly incorporated into local cuisine.

Oaxaca, Mexico has been a culinary mecca for decades and the chili has played an enormous role.  A market excursion wouldn’t be complete without a visit to the chili stalls.  As I’ve written in previous posts, this form of “shopping” goes way beyond simple provisioning.  It’s a both lifestyle and a lifeline to a different time…

Mark Bittman is referring to a particular terroir in his article.  But using an anthropomorphic conceit I’ll ask readers to consider the concept of “slow food” as a citizen of Pangaea.

Recently, after finishing my shopping at the central market we were on the return drive when I glanced to my left and saw a pushcart full of Rambutan and Mangosteen.  I quickly asked Shibu to pull over so I could make sure it wasn’t my imagination.  I have to acknowledge that this was one of the many market-going moments when I wished I’d remembered to tuck the camera into my bag!

The cart had a pile of each fruit…the rambutan (looking like a Martian lychee covered with rubbery “hairs”) ranging from dark red to brownish maroon, and the mangosteen, a beautiful purple brown bordering on eggplant with little stems attached to a woody cap like a circle of flower petals.

There were more mangosteens strung up like Christmas garlands by their stems.  END_OF_DOCUMENT_TOKEN_TO_BE_REPLACED

Yesterday I met and spoke with another longstanding member of the Cardamom Country crew, Executive Chef, Mr. Pradeep. Having been affiliated with this resort since its inauguration  in November, 1999 (in fact starting two months prior to that for training), he serves as a kind of memory box for Cardamom County, not least about its cuisine.  But his  family heritage is intertwined with this location in a fascinating way too.

Chef Pradeep explained that his family hails originally from the state of Maharashtra.  His maternal grandfather came down to help construct the Mullaperiyar Dam 120 years ago, mentioned in greater detail in Michael’s post Damn Dams and Macaques. Thus, Chef Pradeep was born in Thekkady very close to where Cardamom County was eventually built, although he spent most of his life up until college in Madurai, Tamil Nadu. He moved back to Thekkady after he married his wife and decided to settle down at his place of birth. His wife had a government job, which is held in especially high regard here in Kerala, namely for its stability and the pension received later in life. END_OF_DOCUMENT_TOKEN_TO_BE_REPLACED