If you go to the home improvement center, or any gardening shop, you will see this stuff in plastic bags, ranging in size from small pillow to half-bale. If you purchase it you are buying into a destructive practice that goes beyond the destruction of amazingly beautiful landscape. If heritage status helps end that, we are all for it:

Hopes rise that the Flow Country, the world’s largest carbon store, could become first peatland to win the status 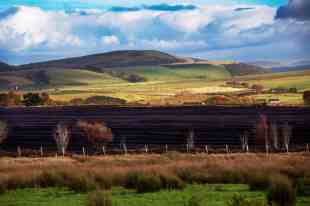 Ecologists estimate that while peatlands cover only 3% of the Earth’s land surface, they hold 30% of the carbon stored on land. Photograph: Murdo MacLeod/The Guardian

Andrew Coupar has crouched down by a small pool, its surface peppered with the small stalks of bogbean. In autumn its dark green oval leaves echo the muted browns, greens and ochres of the surrounding peatland.

In spring, however, the bogbean’s pink-fringed white flowers put on a remarkable display, carpeting the cluster of pools that mirror the blue skies and light clouds above and, along the horizon to west, the mountains of Sutherland. END_OF_DOCUMENT_TOKEN_TO_BE_REPLACED

BBC: In Amazonia’s most carbon-dense ecosystems, an estimate 90% is stored underground as peat

A couple of weeks ago, we featured a story from another British news source about the peat success story in Indonesia, where the new president has pledged to tackle his country’s deforestation rate, the highest in the world. President Joko Widodo announced that both rainforest and peatland would be protected under his governance, even if that meant cracking down on the powerful plantation companies.

This week, scientists at institutions in the UK, Finland, and Peru published a paper in Environmental Research Letters calculating that peatlands, rather than rainforest, are the most dense store of carbon in Amazonia. Mark Kinver reports for BBC News:

Writing in the paper, the scientists observed: “This investigation provides the most accurate estimates to date of the carbon stock of an area that is the largest peatland complex in the Neotropics.”

They said it also confirmed “the status of the [Pastaza-Marañón foreland basin in north-west Peru] as the most carbon-dense landscape in Amanozia”.

“We expected to find these peatlands but what was more of surprise was how extensive they were, and how much this relatively small area contributed to Peru’s carbon stock,” explained co-author Freddie Draper from the University of Leeds.

The 120,000 sq km basin accounts for just about 3% of the Peruvian Amazon, yet it stores almost 50% of its carbon stock, which equates to about three billion tonnes.