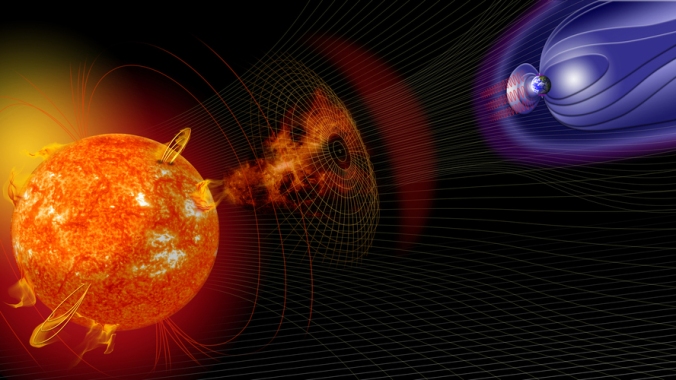 A NASA artist’s illustration of events on the sun changing the conditions in near-Earth space.

Click the image above to go to the 5-minuted podcasted explanation of a project you have likely never heard of.  But it sounds important (perhaps to explain why sometimes your mobile phone gets inexplicably scrambled) and as with the story here it may inspire the career aspirations of a few young clever dreamers:

“When one of these big storms comes in, it can actually change and flex the magnetic field around the Earth,” Stratton says. “So we’ll measure that and then we’ll see how all of that energy that’s coming out of the sun deposits into the Earth’s magnetic field, into the radiation belts.”

Ordinary satellites wouldn’t survive so much radiation. So Stratton and a large team at the Applied Physics Lab have spent years designing and building two very tough spacecraft.

Each of the spacecraft is an octagon about 4 feet tall. But once they are in space, they will deploy booms that extend about the length of a football field.