Five hours away from Thekkady is a colorful land of ornate architectures and a hometown of many fishermen that represent the historical harbor city, Fort Cochin, Kerala. The narrow and winding streets are filled with houses and churches that clearly showe their Dutch, Portuguese, or British influence from the colonial time. As I carelessly stroll down the streets only with my camera and some rupees (Indian currency) in my purse, I didn’t mind the stares from the local village people, nor the heat and humidity that made me drench in my own sweat; but, my mind got carried away seeking the remains of what time had left us. 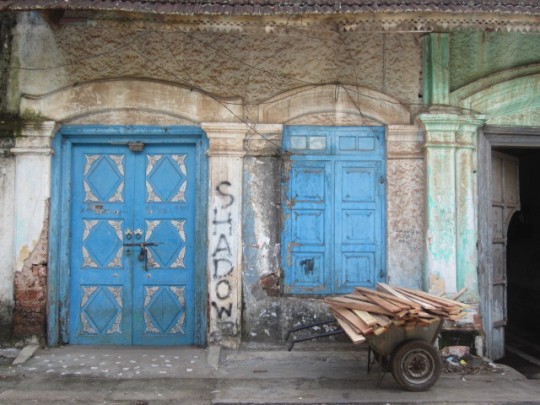 Blue door and window with a wagon

From living in several urban cities for quite a long time, I became dependent on numerous neon signs like those in Times Square, which became the only way to get my attention on the streets. However, now that I arrived in Fort Cochin, another style of signs captured my attention: paint signs. On the doors of numerous stores and shops, I could easily find the colorful paint signs – I want to say “art works” – that resemble the beauty of contemporary art, like an Andy Warhol Campbell soup can. And, of course, goats and roosters that dwell on the side of the streets add a fun twist that complets my picture frames.

A goat enjoying its leisurely morning on the street

Cow sign on the door of a milk shop

Furthermore, every house on the street is painted with numerous bright colors as if they want to be the brightest among all like a contestant of a beauty pageant or a male peacock that trembles its colorful tail feathers to show off its beauty in front of their potential mate.

House with round pink strips 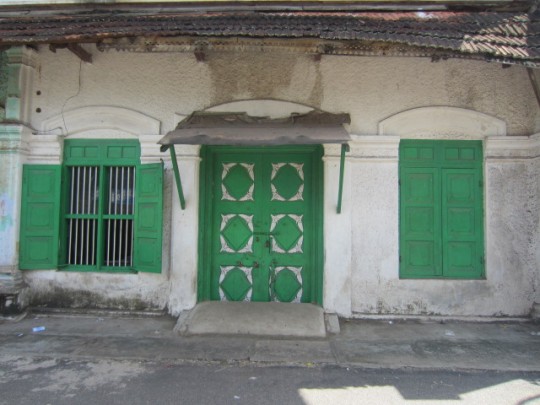 House with green door and windows

Among all the sceneries, the most colorful of all were the red, orange, and blue fishing boats that bounce with the fluctuating movements of the water’s current. As I carefully watched the sunset that casted a warm orange glow on these boats, I was surprised to see how each and every fishing boat, independent from its size, had a unique name written on the side, signifying these fishermen’s pride in their occupation and how precious these boats are to their lives. I could imagine these fishermen waking up before the crack of dawn, diligently gathering their fishing nets, and getting on their boats dragging their half-awake bodies together with their fisherman neighbors.

When I was shamelessly stalking the photogenic lifestyle of the people of Fort Cochin, taking pictures of private houses, some elderly ladies came to me with big smiles on their faces, saying “Photo!” I returned them a bigger smile and took a picture of them as they requested. And, here it is – just like laughter of young school girls. 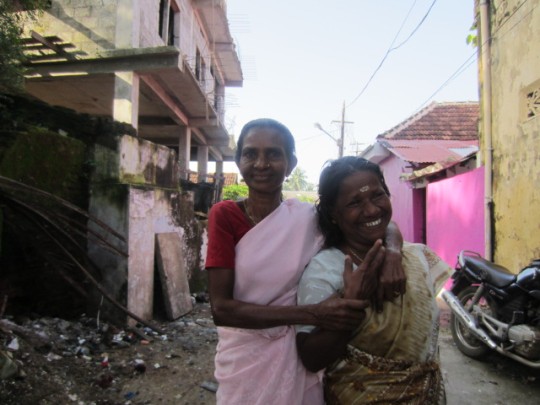 Elderly ladies I met on the street

As India’s economy is growing rapidly, people here started tearing down the old buildings to replace them with new ones. In this time of transition, the city of Fort Cochin is surrounded by walls without roofs that have glassless windows that framed the blue sky behind it like a pastel paintings done by Raphael.

A wall with open-sky windows

And, as some unwanted buildings were left abandoned, instead, lush greenery covers those abandoned structures and brings them another kind of beauty and maybe a hope to be chosen as a next candidate to be reborn in this wonderland!