An article in today’s New York Times by C. Drew Harvell profiles the Blaschkas, glassmakers who were commissioned to create anatomically perfect sculptures of marine creatures for scientific purposes starting in the late 1800s, and current efforts to find living specimens of the same. From the introduction to one of the original collections, at Cornell University:

Before Jacques Cousteau and the aqualung, before Kodachrome and underwater photography – there were the Blaschkas, father and son glassworkers who produced some of the most extraordinary glass objects that have ever been made. Their work has been described as “an artistic marvel in the field of science and a scientific marvel in the field of art.”

Artifacts inevitably reflect the cultural values leading to their creation. In 19th century Europe and America, an explosion of interest in science and education directly affected Leopold and Rudolf Blaschka. Reflecting these interests, new museums were built and opened to the public. They differed from earlier museums not only by admitting the public but also by featuring collections that illustrated science and natural history and often displayed systematic arrangements of plants and animals.

Leopold Blaschka solved a problem that challenged the curators of these new natural history museums-the display of marine invertebrates. Unlike specimens with backbones, which could be stuffed and mounted, invertebrates had to be preserved in alcohol and inevitably lost their colors and shapes. Glass proved to be the ideal material to recreate these fragile forms.

Although the father and son team of Leopold and Rudolf Blaschka were not the only makers of natural history educational models in the 19th century, they were the only ones creating glass models. Other model makers used wax or papier maché, neither of which has the precision of detail or longevity found in glass. The two Blaschkas, descendents of a long line of Bohemian glassworkers, created their thousands of glass models without the assistance of others. Between 1863 and 1936, they supplied museums and universities all over the world with stunningly lifelike models of plants and animals. Their work culminated in the Ware Collection of Glass Plants at the Harvard Museum of Natural History, completed by Rudolf in the 1930s. 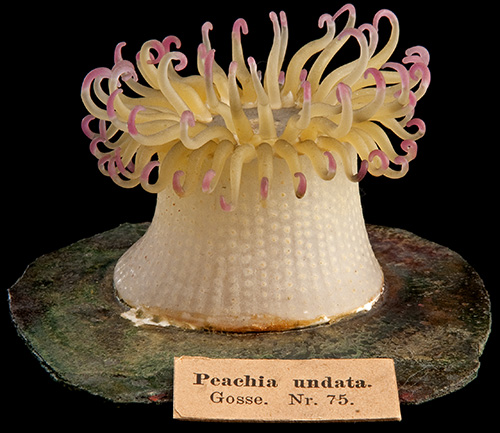 More about the collection here:

Cornell University is one of a handful of academic institutions in the United States with a collection of glass invertebrates created by renowned 19th century glass artists Leopold and Rudolf Blaschka. Under the direction of curator Dr. Drew Harvell, Cornell’s Department of Ecology and Evolutionary Biology has undertaken the full restoration of this unique glass sculpture collection. A selection of restored invertebrates is on view in the atrium of Corson Hall on Tower Road on the Cornell campus, among them some extraordinary jellyfish, sea anemones and nudibranchs. A smaller number is on exhibit at the Johnson Museum of Art, and an additional display of restored pieces opened in the Albert R. Mann Library in June 2010. Collaboration between the Dept. of Ecology and Evolutionary Biology and Mann Library has also made an online gallery of the larger Cornell Blaschka collection available for use by scholars and educators.

Efforts to restore the full collection of Blaschka invertebrate models at Cornell are ongoing, funded entirely through gift support. Cornell University has restored approximately 170 of the 570 items in the collection thus far and restoration work will continue as funding allows.

For more information on the Cornell Blaschka collection and its importance to the study of ocean biology, please see a webcast of Dr. Drew Harvell’s June 2010 lecture at Mann Library.