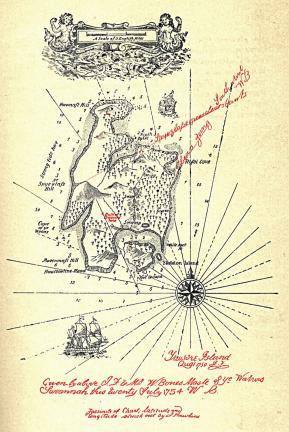 Travel without a map can be fun, sometimes, if adventure is the objective; but context and direction helps more than it hurts most of the time. The same is true when maps are there just for the sheer pleasure or comfort, in environmentally sensitive, creative graphic design, or for historical research. This post on the New Yorker‘s website captures the sentiment well:

For years, I carried the same map wherever I went. When I wasn’t travelling, Scotch Tape held it to the back of my bedroom door: it was visible to me when the door was closed, but invisible to almost everyone else. That map moved from dorm rooms to apartments and houses, from the Eastern Shore of Maryland to New England, from New England to the United Kingdom, and back again.

When I felt homesick, I would drag my fingers up and down the map’s paper folds, tracing its shorelines and rivers, wishing they were the real thing. But touching that map only made me more homesick. What I wanted was a map of exact scale, one that wasn’t just a representation but reality itself, the sort imagined by Lewis Carroll in “Sylvie and Bruno Concluded”:

“What do you consider the largest map that would be really useful?”

“About six inches to the mile.”

“Have you used it much?” I enquired.

“It has never been spread out, yet,” said Mein Herr: “the farmers objected: they said it would cover the whole country and shut out the sunlight! So we now use the country itself, as its own map, and I assure you it does nearly as well.”

I suppose anyone who is homesick or lost wants that mile-to-mile correspondence. But Carroll’s map is pure fiction, and not only because of its outlandish scale. No map can be a perfect representation of reality; every map is an interpretation, which may be why writers are so drawn to them.

Writers love maps: collecting them, creating them, and describing them. Literary cartography includes not only the literal maps that authors commission or make themselves but also the geographies they describe. The visual display of quantitative information in the digital age has made charts and maps more popular than ever, though every graphic, like every story, has a point of view.

Maps are a standard of adventure, fantasy, and science fiction. Robert Louis Stevenson’s novel “Treasure Island” did not begin with Billy Bones or Jim Hawkins, but with a map. Summering in Scotland, in 1881, Stevenson entertained his twelve-year-old stepson by painting when the rain and cold kept them indoors. Stevenson writes, in an essay: “On one of these occasions I made the map of an island; it was elaborately and (I thought) beautifully colored; the shape of it took my fancy beyond expression; it contained harbors that pleased me like sonnets; and with the unconsciousness of the predestined, I ticketed my performance ‘Treasure Island.’ ”

Not only did the map give Stevenson a setting; it shaped the novel’s narrative and characters. Stevenson wrote that, when he “pored upon [his] map of ‘Treasure Island,’ the future characters of the book began to appear there visibly among imaginary woods; and their brown faces and bright weapons peeped out upon me from unexpected quarters, as they passed to and fro, fighting, and hunting treasure, on these few square inches of a flat projection.” The map printed in the novel’s pages was not some final flourish but a record of its very origins.

Ursula K. Le Guin’s “The Earthsea Trilogy” also began with a map she drew herself. Even when they are not mapmakers, fantasy and science-fiction authors have overseen the creation of cartographic representations of their fictional worlds. J. R. R. Tolkien commissioned Pauline Baynes, who learned mapmaking in the Ministry of Defence during the Second World War, to create maps of his fictional land, Middle Earth: her delicate elven script proclaimed place names, tree-dotted forests and sharp-peaked mountain ranges giving depth to the scenery, and a selection of inserts illustrated some of the architecture, characters, and creatures.

Writing to his publisher in 1949, after receiving some of Baynes’s drawings for “Farmer Giles of Ham,” Tolkien expressed his satisfaction with her art: “They are more than illustrations, they are a collateral theme. I showed them to my friends whose polite comment was that they reduced my text to a commentary on the drawings.” The same could be said for her map of Middle Earth, which influenced the way many readers visualized the imaginary world. Tolkien was so satisfied with her work that he introduced her to his friend C. S. Lewis, for whom she mapped Narnia. More recently, Lev Grossman saw to the production of elaborate maps, by Roland Chambers, for his novels “The Magicians” and “The Magician King.” And George R. R. Martin even printed an entire volume of maps to accompany his series “A Song of Ice and Fire,” which began with the book “A Game of Thrones.”