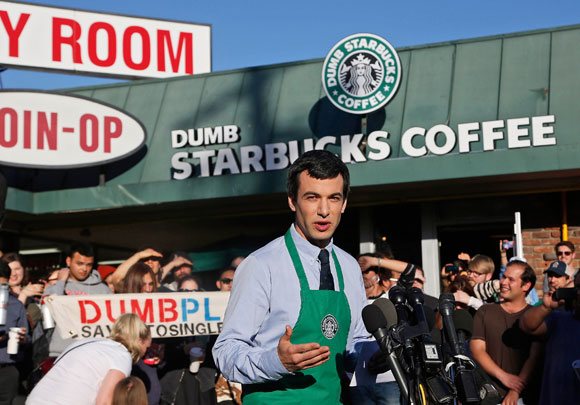 What with bird-counting, we almost missed the dumb hoax–not to say the hoax was dumb but that the hoax about dumb was almost lost on us.  And not only because we do not always scan the “news” far and wide enough to catch such scintillating plums. Also because we might not have seen the art in this concept; only the discontent, the humor, the clever. Is it art? Protest? Both?  The post below on the New Yorker’s website, as often happens, sheds the light we need to “get” what might otherwise have been lost:

Last weekend, a pop-up shop called Dumb Starbucks appeared in Los Feliz, Los Angeles, five miles east of the Hollywood Hills. It seemed like any other Starbucks store, but it gave away “dumb” versions of items sold by the Seattle-based coffee giant: Dumb Iced Vanilla Latte and Dumb Blonde Roast. For full effect, there were compact discs with names like “Dumb Jazz Standards,” “Dumb Taste of Cuba,” and “Dumb Nora (sic) Jones” by the registers. Californians waited in line for hours for the “horrible coffee,” while Starbucks grew flustered at the use of its “protected trademark.” Before the caffeine buzz could wear off, the loud voices of the social-media sphere started wondering: Who put up Dumb Starbucks? And was it a legitimate political statement about consumerism—perhaps an offshoot of Occupy Wall Street—or a well-executed viral marketing stunt?

A bulletin in the window of the faux café provided a clue. It read, “In the eyes of the law, our ‘coffee shop’ is actually an art gallery and the ‘coffee’ you’re buying is considered the art.” But the mystery of its provenance continued until Monday morning, when a man named Marc Horowitz chimed in. He posted on Facebook, “My project is causing quite a stir—lol.” His declaration received more than a hundred likes and more than a little media attention.

Horowitz’s story seemed logical. He is, as the Hollywood Reporter wrote, “an L.A.-based conceptual artist” known for his social experiments. In 2005, when he was working as a photo assistant at Crate & Barrel, he snuck his phone number into the home-furnishing chain’s national catalogue with the message “Dinner w/ Marc.” Thirty thousand people called, and he spent the next year crossing the country in a small R.V., eating dinner with some of them. The project, known as “The National Dinner Tour,” made the rounds on local news and late-night television. Five years later, he was selected, from over nine thousand applicants, as one of AOL’s twenty-five “innovators and visionaries.” The judges, who included the director of the Whitney, awarded Horowitz a grant of twenty-five thousand-dollars for his “socially oriented projects and playful enterprises.” Days after he received the prize, Horowitz launched “The Advice of Strangers,” in which he relinquished control of his life to the public for one month, making daily decisions based on the results of Internet polls.

Horowitz posted the Hollywood Reporter article on his Facebook page with three smiley faces, which seemed to end the story. But, a few hours later, the comedian Nathan Fielder held a press conference in the familiar Starbucks-green apron and revealed that he was, in fact, responsible for the gag, and that it was a promotion for the upcoming season of his Comedy Central series, “Nathan for You.” Horowitz’s post had been a hoax wrapped in prank.

It was also, Horowitz contends, art. The bulletin in the window claimed that Starbucks’s giveaway coffee was art, but Horowitz believes that the art actually began when he claimed Dumb Starbucks as his own. On Monday, as part of a lecture on appropriation and hijacking, for the Internet-studio-art class that he teaches at the University of Southern California, Horowitz posted his claim on both Twitter and Facebook. It was “an experiment and lesson,” he told me in an e-mail. “It blurred authorship and caused confusion within the media hysteria. With this simple gesture, I was able to steer the global media discussion around Dumb Starbucks.”…

One thought on “This Modern World, Its Conceptual Artists, Its Discontents”