News feeds–especially those that give attention to adventure, and extreme sports and rock climbing in particular–are full of this story just now about two friends accomplishing one of the greatest challenges left in the small specialty sport. We are not at all devoted to the sport, but in the last year or two have developed a fascination, based on another climber’s feats and travails, mainly because of the collaboration component of climbing. 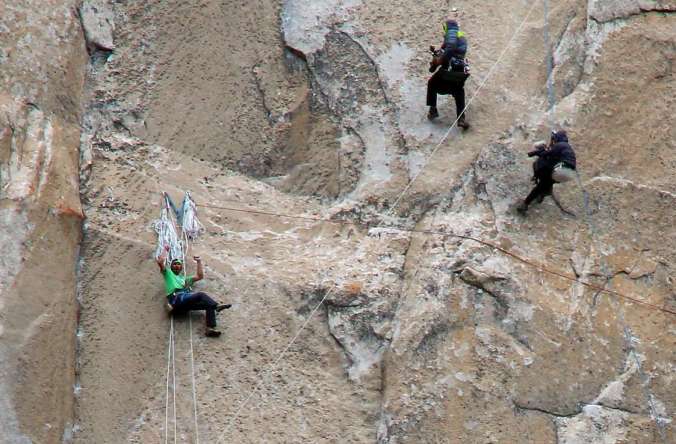 © AP Photo/Tom Evans, elcapreport In this Jan. 8, 2015 photo provided by Tom Evans, Kevin Jorgeson celebrates his finishing the climb of Pitch 15 while two photographers shoot video and stills from above…

Today’s news brings the collaboration part back to the forefront, in this case not due to absolute requirement but due to friendship. It is touching, in that “feel good” sense related to hoping you would do the same thing in the circumstance described; but more than that, it is just awesome:

The pair embraced and then Jorgeson pumped his arm in the air and clapped his hands above his head. After years of practice, failed attempts and 19 grueling days scaling the vertical wall on El Capitan by their bloodied fingertips, the friends at last grasped success.

“That’s a deep, abiding, lifelong friendship, built over suffering on the wall together over six years,” said Caldwell’s mother, Terry, among some 200 people in the valley floor thousands of feet below who broke into cheers at the climbers’ historic feat Wednesday.

She said her son could have reached the top of the world’s largest granite monolith several days ago, but he waited for his friend to ensure they made it together.

The men completed what had long been considered the world’s most difficult rock climb, captivating the world through social media and livestreamed video coverage while documentary filmmakers dangled from ropes capturing each move.

Caldwell, 36, and Jorgeson, 30, became the first to free-climb the rock formation’s Dawn Wall, a feat many had considered impossible. They used ropes and safety harnesses in case of a fall but relied entirely on their own strength and dexterity to ascend by grasping cracks as thin as razor blades and as small as dimes.

The two dealt with constant falls and injuries. But their success completes a yearslong dream that bordered on obsession.

At the top, another crowd was waiting for them, including Caldwell’s wife and Jorgeson’s girlfriend, who welcomed them with hugs and kisses before they hiked down the peak.

President Barack Obama sent his congratulations from the White House Twitter account, saying the men “remind us that anything is possible.”

The trek began Dec. 27. Caldwell and Jorgeson lived on the wall itself, eating and sleeping in tents fastened to the rock thousands of feet above the ground and battling painful cuts to their fingertips much of the way.

Free-climbers do not pull themselves up with cables or use chisels to carve out handholds. Instead, they climb inch by inch, wedging their fingers and feet into tiny crevices or gripping sharp, thin projections of rock. In photographs, the two appeared at times like Spider-Man, with arms and legs splayed across the pale stone that has been described as smooth as a bedroom wall.

Both men needed to take rest days to heal. They used tape and even superglue to help protect their raw skin. At one point, Caldwell set an alarm to wake him every few hours to apply a special lotion to his throbbing hands.

They also endured physical punishment whenever their grip slipped, pitching them into long, swinging falls that left them bouncing off the rock face. The tumbles, which they called “taking a whipper,” ended with startling jolts from their safety ropes.

Caldwell and Jorgeson had help from a team of supporters who brought food and supplies and shot video of the adventure.

The pair ate canned peaches and occasionally sipped whiskey. They watched their urine evaporate into the thin, dry air and handed toilet sacks, called “wag bags,” to helpers who disposed of them.

There are about 100 routes up the rock known among climbers as “El Cap,” and many have made it to the top, the first in 1958. Even the Dawn Wall had been scaled. Warren Harding and Dean Caldwell (no relation to Tommy) made it up in 1970, using climbing ropes and countless rivets over 27 days.

No one, however, had ever made it to the summit in one continuous free-climb — until now…

One thought on “Friends, Collaboration And Awesome Accomplishment”