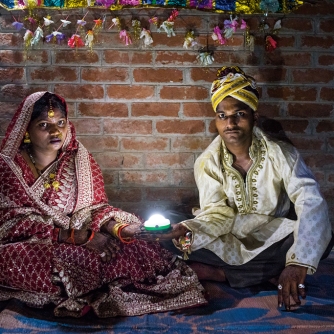 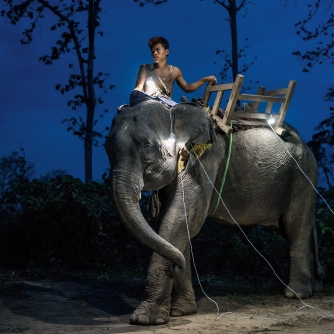 A worker at a logging camp in Myanmar’s Bago region, where elephants have been used by loggers for centuries, sits atop his 11-year-old animal. Laborers in these camps have no electricity, so they use solar lanterns before sunrise. PHOTO: Nat Geo

About seven out of every 10 households in rural India have no access to electricity. Many of these households still use less efficient energy sources that are harmful to the environment, such as kerosene. Even in places where electricity is accessible, shortages are frequent and the supply is inconsistent. In such a scenario, solar lamps come as a blessing and are revolutionizing lives in the country and around the world.

PRASHANT MANDAL FLIPS ON A CANDY-BAR-SIZE LED LIGHT in the hut he shares with his wife and four children. Instantly hues of canary yellow and ocean blue—reflecting off the plastic tarps that serve as the family’s roof and walls—fill the cramped space where they sleep.  He shuts down the solar unit that powers the light and unplugs it piece by piece, then carries it to a tent some 20 yards away, where he works as a chai wallah, selling sweet, milky tea to travelers on the desolate road in Madhotanda, a forested town near the northern border of India.

“My life is sad, but I have my mind to help me through it,” Mandal says, tapping the fraying cloth of his orange turban. “And this solar light helps me to keep my business open at night.”

Mandal, whose home sits illegally on public land at the edge of a tiger reserve, is just a tiny cog in a surging new economic machine, one that involves hundreds of companies working aggressively to sell small solar-powered units to off-grid customers in developing nations to help fill their growing energy needs. Roughly 1.1 billion people in the world live without access to electricity, and close to a quarter of them are in India, where people like Mandal have been forced to rely on noxious kerosene and bulky, acid-leaking batteries.

Roughly 1.1 billion people in the world live without access to electricity, and close to a quarter of them are in India.
Mandal’s solar unit, which powers two LED lights and a fan, is energized by a 40-watt solar panel. Sun beats down on the panel, charging a small, orange power station for roughly ten hours at a time. Mandal leases the kit from SimpaNetworks. A for-profit company with a name derived from the notion of “simple payments,” Simpa offers subscription plans structured to fit the budgets of low-income consumers. Even so, the equivalent of roughly 35 cents a day is a massive expenditure for Mandal, who supports his family on a razor-thin budget of less than two dollars a day. Food costs money, as do schoolbooks, medicine, and tea. His middle son, who’s 15, fell ill late last year, and the hospital bill plunged the family into debt exceeding $4,000.
Nevertheless Mandal says that spending 20 percent of his earnings on Simpa’s services is better than living so much of his life in total darkness. “I was spending that much to recharge a battery before,” he says. “I would walk about one kilometer back and forth up the road to recharge it. Sometimes battery acid would spill and burn me. One time it spilled and burned right through the fabric of my pants—all for power.”

Read more stories from across the world, here.