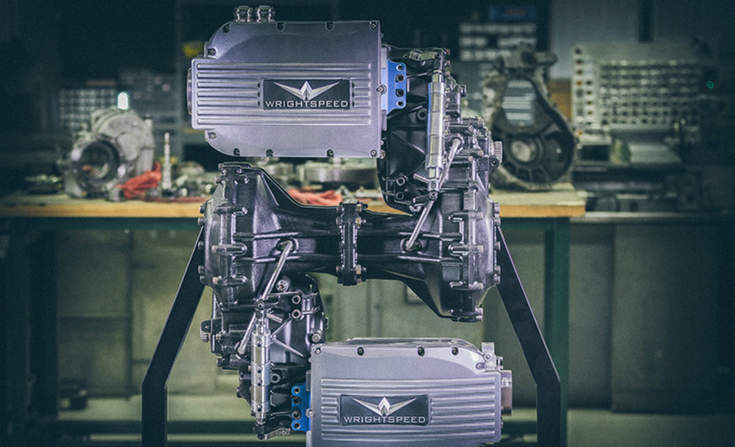 Wrightspeed’s new range-extended electric powertrain can be installed as a retrofit to a standard diesel garbage truck, more than doubling mileage and lowering carbon dioxide emissions up to 68 percent.

We are all fans of electric vehicles and what they represent for a transition away from fossil fuel dependence in daily life, drastically reducing carbon emissions with transportation, and lower noise pollution. Cheryl Katz reports for GreenBiz.com about a shift to electric vehicles — not for consumer use, but commercial:

The clang of garbage cans still probably will wake people way too early in the morning. But in Santa Rosa, California, at least, the roaring diesel engine will be quiet, replaced by a silent, electric motor.

The electric garbage trucks scheduled to begin rolling there this summer may be less alluring than the sporty vehicles that engineer Ian Wright helped design as co-founder of Tesla Motors. But Wright, who left the high-end electric car company to start Wrightspeed, maker of electric powertrains for medium- and heavy-duty commercial vehicles, is on a campaign to force large, carbon-belching engines off the road.

In today’s hyperkinetic world, moving people and things is the planet’s fastest-growing energy-based source of greenhouse gases, with some projections saying that transport emissions nearly could double by mid-century as developing nations industrialize. Climate scientists and policymakers say replacing petroleum-burning engines with alternatives such as electric motors is critical to meeting the greenhouse gas-reduction goals set by the international community in Paris in December.

But while the adoption of electric cars has been hindered by high prices, limited range, a lack of charging stations and competition from cheap gasoline, heavier-duty models are undergoing rapid innovation for applications such as battery-powered city buses, delivery trucks, freight loaders and ferries. Experts say that these electric workhorses can play an important role in decarbonizing transport, and could spin off technologies that benefit electric cars, a far larger — and, from a carbon perspective, more important — market.

Christopher Knittel, director of the Center for Energy and Environmental Policy Research at the Massachusetts Institute of Technology, said the development of heavier-duty electric motors, batteries and vehicle technologies potentially could help cut commercial and municipal transport’s carbon emissions by 25 to 50 percent in the coming decades.

The industrial sector may be quicker than personal car buyers to adopt pricey new technologies because costs can be amortized and benefits such as fuel savings will multiply across equipment fleets, said Peter Harrop, chairman of the tech market analysis firm IDTechEx. Commercial and industrial electric vehicle sales will outpace the consumer market at least until the middle of the next decade, according to Harrop.

Moreover, the new technologies being developed for heavier-duty applications also potentially could boost range and performance for electric cars.

“We are driving down the component costs, and driving up the system efficiencies, and we have a very cost-effective architecture,” said Wright.”And that all helps get it into lighter vehicles.”

Electrically propelled commercial conveyances are nothing new. Small, battery-powered trucks such as forklifts have toiled inside warehouses for decades. Electric cables or rails long have powered trams and trains.

But the emergence of industrial-strength electric battery and motor technology is freeing public transit from route-restricting wires and enabling trucks to haul weightier loads over longer distances. Analysts say that the greatest emissions impact outside the personal vehicle market probably will come from electrifying public transit. Large, battery-powered city buses can travel their entire daily route (generally up to around 150 miles) on a single charge. China, the world leader in manufacture and export of electric buses, is also the biggest electric-bus user, with around 80,000 on the road and thousands more set to come. Shanghai alone announced plans to add 1,400 electric buses a year beginning in 2015.

Electric buses are also gaining ground in the United States and Europe. Dozens are already rolling in places such as Southern California’s San Gabriel Valley, Nashville and San Antonio, and several cities are considering adding more than 200 electric buses nationwide over the next few years. Even London’s iconic double-deckers are going electric, with the first five being put into service this spring. IDTechEx projects that global electric bus sales will near 60,000 in 2017, and top 250,000 by 2025.

The new electric drives are particularly suited to medium- and heavy-duty vehicles that make frequent stops, and they are gaining use in short-haul cargo trucks, tractor-tractors and delivery vans, including more than 800 electric trucks used by FedEx and UPS. The technology is even making its way to sea, including hybrid electric tugboats escorting freighters in the port of Los Angeles, and all-electric ferries that have started plying the Norwegian fjords.