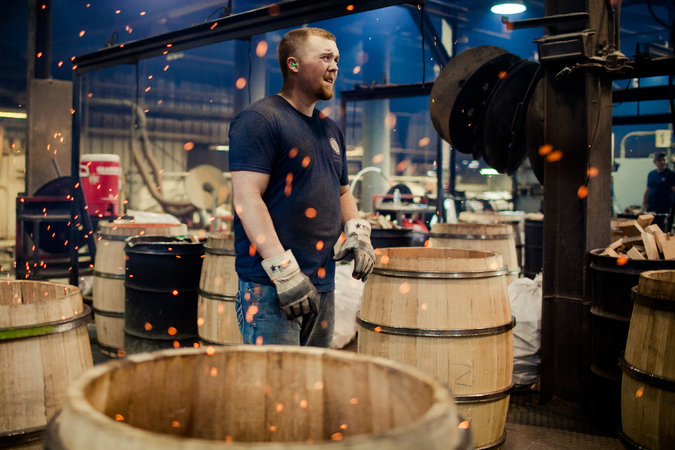 Kyle Guyer prepared to flip a barrel during toasting at the Missouri Cooperage operation of Independent Stave in Lebanon, Missouri. Lasers and infrared cameras have refined the toasting process to give the customer a desired flavor profile.
Credit August Kryger for The New York Times

Every now and then we find interesting stories from the world of distilleries. Maybe it’s a small mescal brewer, or a giant liquor corporation giving back in some way, or the history of traditional London gin, or people making beer out of wasted bread. In the world of wine and certain spirits, oak barrels are imperative to the process of aging the drink, and the technology involved in cooperage has changed a lot in the last couple years, even as barrels look exactly as they did hundreds of years ago. Clay Risen reports for the New York Times:

SALEM, Mo. — Standing on a wooded hillside in the Ozarks, about 100 miles southwest of St. Louis, Brad Boswell watches a chain-saw-wielding logger make several deft cuts at the base of a 100-foot white oak. The logger points to a clearing down the slope and, with one final, quick slash, sends the tree falling, exactly where he pointed.

Mr. Boswell scrambles over to look at the swirls and loops that make up the tree’s cross section. If they’re consistent, and the wood doesn’t show scars from fire damage or disease, it will most likely end up in some of the hundreds of thousands of barrels that his 1,500-person company, Independent Stave, turns out every year.

His great-grandfather, T. W. Boswell, founded Independent Stave in 1912, and Brad Boswell now runs it with his brother and sister. Based in Lebanon, Mo., it is the world’s largest barrel manufacturer, at a time when demand for wine, whiskey and beer — all of which rely on barrels for aging — is skyrocketing.

The United States is now the largest market for wine barrels. Domestic whiskey production is up 41 percent in the last decade — and, thanks to a quirk in federal law, almost every drop has to be aged in a new oak barrel. The demand has come on so suddenly and vertiginously that barrel prices are up 70 percent since 2012, and some cooperages have 12-month waiting lists.

As a private company, Independent Stave does not release revenue or production numbers, but industry experts estimate that its output has doubled in recent years. “It all happened really fast,” Mr. Boswell, 45, said. “There’s a craft boom everywhere.”

The barrel industry — which includes about 15 companies, most of them, aside from Independent Stave, quite small — stands as an exception in a mainly dismal American manufacturing industry: Despite an overall robust July employment report, the country lost 33,000 manufacturing jobs in the previous six months.

Bucking that trend, several new cooperages are in the works, and existing companies have all expanded production. “It’s definitely a good problem to have,” said Heidi Korb, the owner of Black Swan Cooperage, in Park Rapids, Minn.

Not long ago, though, the world didn’t think much of American oak barrels. The bourbon industry cratered in the 1980s and ’90s, while American winemakers preferred to import expensive French oak barrels, the better to craft the Bordeaux-style reds coming out of California.

A big part of the problem was the barrels themselves, which were often full of imperfections because of frequent forest fires and arboreal diseases. “Back in the day, you’d see fire scars, knots, timber streak, all sorts of things,” Mr. Boswell said.

Low-tech American cooperages didn’t do much to improve the situation. An American barrel in 1990 looked, and performed, about as well as a barrel from 1790.

But alongside the bourbon boom of the last decade has come a technological revolution in American barrel making, led by the Boswells and Independent Stave. Computers, cameras and a better understanding of the science behind barrel aging have taken much of the guesswork out of the process, and allowed an explosion in customization and innovation.

“When I started, you couldn’t run your hand over the barrels or else you’d get splinters,” said David Pickerell, a whiskey industry consultant and former master distiller at Maker’s Mark who has worked with two generations of Boswells at Independent Stave. “Now, they’re like furniture.”

A century ago, when T. W. Boswell founded Independent Stave, the wood barrel was the equivalent of today’s aluminum shipping container, a workhorse used to haul products as diverse as whiskey and wood nails. He was following in a long and little-changed tradition: Evidence of barrel making dates back to the Celts in third-century B.C. Spain. Coopers were valued craftsmen in colonial America and into the post independence expansion westward.

Between uses, merchants would burn their barrels’ insides to sterilize the surface and remove errant smells or flavors. Somewhere along the way, customers noticed that wines and spirits that spent a few months in a barrel lost some of their edge and took on a pleasant color and flavor. Barrel aging was born.

At first, Independent Stave just made staves — the slats that make up a barrel, hence the name — because many distilleries fashioned their own barrels. It was a good business to be in, thanks to the 1935 Federal Alcohol Administration Act, passed two years after the end of Prohibition, which requires virtually all American whiskey to be aged in new barrels. Once a barrel is used, no matter how short the aging period, it must be replaced.

Whiskey and wine consumption picked up through the postwar years, and the company expanded with it. In 1951, it opened its own cooperage, aimed at the expanding whiskey industry. In the 1980s, as American drinkers turned from whiskey to unaged, supposedly “cleaner” spirits like vodka, it began selling to wineries as well.

But outside the foundering whiskey industry, sales were anemic. American barrels tended to be viewed as solid but unrefined. “Up until the 1990s, we made just three kinds,” Brad Boswell said.

No wonder American wineries preferred the sophistication of French oak. In France, coopers dried their wood for up to three years, while Americans tended to stop at a year. French coopers applied small flames to the inside of their barrels to lightly toast them, turbocharging certain flavors. Americans practically set their barrels on fire, giving everything, whether whiskey or wine, a charred, intensely vanilla flavor.

John Boswell — T. W. Boswell’s grandson and, like most men in his family, an engineer — decided to do something about it. He put quality-control systems in place, from random sampling to laser measures, to weed out low-quality logs. He started drying his logs longer.