There is an excellent article about old treaties and new alliances empowering indigenous people in North America, which this excerpt captures well:

…In Idaho last summer, tribal representatives from 19 states met for what organizers said was the biggest Native American workshop on climate change, and they concluded that global environmental changes transcended national boundaries.

“This is how land resource decisions are going to be made in the future — through co-management with people who have been on the land forever,” said Hadley Archer, the executive director of the Nature Conservancy Canada, which helped put together the Great Bear forest agreement. To that end, the University of Victoria law school in British Columbia will begin enrolling students next year in a degree program that will combine the traditional study of court precedents and legislation with the study of tribal law.

People like Chantal Pronteau, a member of the Kitasoo/Xai’Xais Nation (pronounced hay-hay), are walking this uncharted road.

Last year, Ms. Pronteau, 22, put on a uniform as a member of the Coastal Guardian Watchmen, a Native American patrol, to monitor the environment and guard against poachers and illegal tree-cutters from Klemtu, her community’s tiny home village of about 300 people. The village, in British Columbia, is reachable only by boat or air. 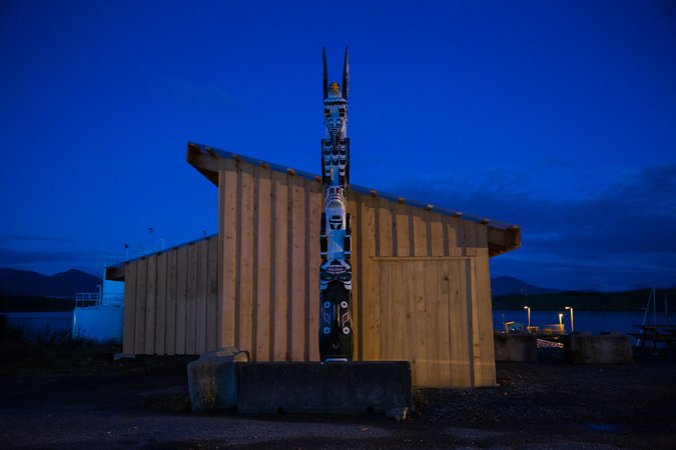 A totem pole near the dock in Bella Bella, British Columbia. The Heiltsuk tribe has been able to assert some control over their lands with assistance from the Nature Conservancy. Credit Ruth Fremson/The New York Times

Changes are everywhere, she said. Grizzly bears have been swimming across fjords and rivers to colonize islands where they have not been seen before, as salmon become harder to find. Whales are wintering off the coast rather than heading to Hawaii, breaking another ancient pattern. A treasured culinary seaweed disappeared this year.

“We’re the eyes and the ears,” Ms. Pronteau said as she walked a stretch of rocky beach in her black Coastal Guardian Watchman jacket. The importance of her work patrolling the tribe’s territory by boat and on foot, she added, “feels beyond what words can describe, because of what we’re working for, who we’re working for and why we’re working.”

The great mossy forest belt of the Pacific Northwest — culturally, environmentally and economically crucial to people here for millenniums — was where this new power dynamic began. In the mid-1990s, indigenous people began protesting the clear-cutting of trees in the Great Bear forest. Involvement of conservation groups like the Nature Conservancy then led to a series of agreements that were capped this year with the tribes and the government of British Columbia banning or strictly limiting industrial logging in nearly half of the forest.

An endowment fund created earlier in that process, in 2007, linked economic development and tribe-led science and management in the Great Bear forest. That fund helps back programs like the Coastal Guardian Watchmen, which involves at least 14 tribes in the Great Bear area out of 27 that signed the agreement…