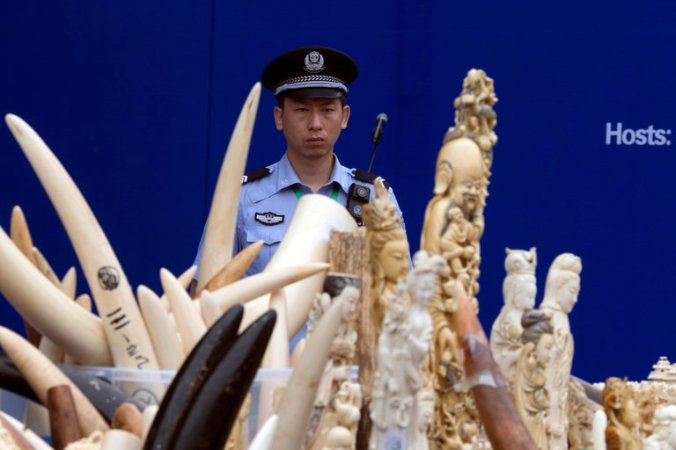 A Chinese police officer watched over ivory products being prepared for destruction during a ceremony in Beijing in 2015. China’s ban announced on Friday would shut down the world’s largest domestic ivory market. Credit Ng Han Guan/Associated Press

Yesterday’s news, combined with today’s, could be called a conservation bifecta:

China announced on Friday that it was banning all commerce in ivory by the end of 2017, a move that would shut down the world’s largest ivory market and could deal a critical blow to the practice of elephant poaching in Africa.

The decision by China follows years of growing international and domestic pressure and gives wildlife protection advocates hope that the threatened extinction of certain elephant populations in Africa can be averted.

“China’s announcement is a game changer for elephant conservation,” Carter Roberts, the president and chief executive of the World Wildlife Fund, said in written statement. “With the United States also ending its domestic ivory trade earlier this year, two of the largest ivory markets have taken action that will reverberate around the world.”

Tens of thousands of elephants have been illegally killed in recent years, mostly to meet the Chinese demand for ivory. Some Chinese investors call ivory “white gold,” while carvers and collectors call it the “organic gemstone.”

Elly Pepper, a wildlife advocate with the Natural Resources Defense Council in New York, wrote that China’s announcement “may be the biggest sign of hope for elephants since the current poaching crisis began.”

Wildlife advocates have said for years that the most important step in putting poachers out of business would be ending the ivory trade in China.

The advocates have promoted long-running public campaigns to shame China and raise questions about its global responsibilities, at a time when China has been assuming a higher profile on the world stage. The success of the new policy depends on how strictly it is enforced.

In the announcement, the State Council, China’s cabinet, said the shutdown of the market would occur in phases throughout 2017. In the first step, a designated group of legal ivory processing factories and businesses will be forced to close by March 31. The Ministry of Culture will help in the transition of legal ivory into use in museums and other cultural sites, as well has help workers in the ivory industry, including master carvers, find related jobs…