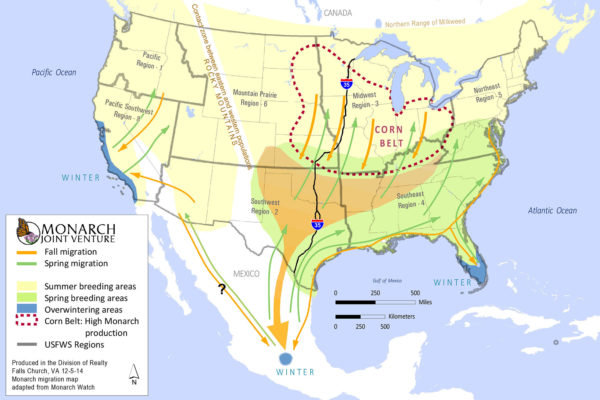 Interstate 35, which stretches from Minnesota to Mexico, lies in the heart of the monarchs’ migration route.

Thanks to Janet Marinelli and the team at YaleEnvironment360:

Can the Monarch Highway Help Save a Butterfly Under Siege?

The population of North American monarch butterflies has plummeted from 1 billion to 33 million in just two decades. Now, a project is underway to revive the monarch by making an interstate highway the backbone of efforts to restore its dwindling habitat.

Interstate 35 lies at the heart of a vast circulatory system, one of the massive transportation arteries that enable Americans to move long distances quickly. The highway also cuts through the heart of the eastern monarch’s central flyway, which produces the vast majority of brilliant orange and black butterflies that undertake one of the world’s most grueling insect migrations.

En route from as far away as southern Canada to their wintering grounds in steep, fir-clad slopes northwest of Mexico City, monarchs must fly through numerous metropolitan areas strung along the 1,568-mile river of asphalt, including Minneapolis-St. Paul, Kansas City, and Dallas-Fort Worth. Once a vast expanse of prairie, today the I-35 corridor not only bisects cities and suburbs but also passes through the Corn Belt, an ever-expanding patchwork of corn and soybean monocultures laced with the herbicide glyphosate. According to Chip Taylor, director of Monarch Watch and a biologist at the University of Kansas, the resulting loss of monarch habitat has been “tremendous.”

During the winter of 2013-2014, only about 33 million monarchs made it to their Mexican mountain sanctuaries, a staggering drop from the estimated one billion recorded in 1996. A study published last year concluded that if current trends continue, there is a “substantial probability” that the number of wintering butterflies will fall so low that a single storm could virtually wipe them out, dealing the migration a fatal blow.

To stanch the losses and safeguard the migration’s future, in 2015 and 2016 a pollinator task force formed at President Obama’s request released reports that detail a major new strategy to rebuild the butterfly’s wintering population, mostly through aggressive habitat restoration in natural areas, along roadways, on utility right-of-ways and farms, and in parks, gardens, and schoolyards throughout a broad swath of land that runs for 100 miles on either side of I-35.

At the center of the plan is the effort to rebrand the interstate as the “Monarch Highway,” creating habitat on the roadway’s verges while employing educational materials such as signs to make motorists aware of the plight facing the monarch and other critical pollinators. In a 2015 white paper, Taylor sketched out a five-year plan for the massive restoration project, including two planting options and projected costs. In one option, two 10×100-foot plots of “plugs,” or small plants, would be installed on each mile of interstate, at a total cost of some $7 million. In the other, one acre per mile of roadway would be restored using seeds, at a total cost estimated anywhere from $2.8 million to $5 million. The plantings would include a variety of species favored by bees, butterflies, and other pollinators, including milkweeds, the only food source for monarch caterpillars. Over time the habitat islands would expand as an annual, late-season mowing dispersed the seeds…

One thought on “A Highway For Monarchs”