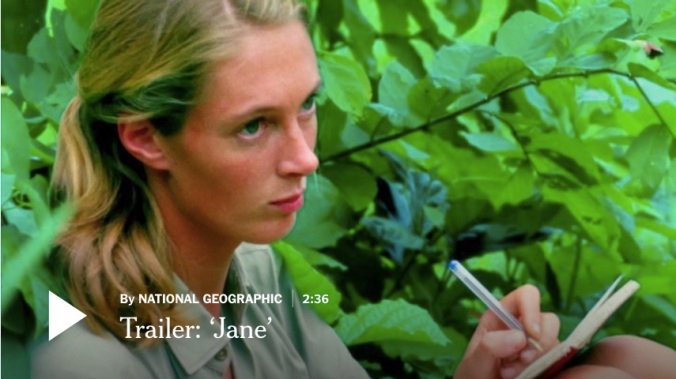 A preview of the film. By NATIONAL GEOGRAPHIC on Publish DateOctober 18, 2017.Image courtesy of Internet Video Archive. Watch in Times Video »

Several of us contributing to this platform have had the opportunity to meet her, and can attest to what Melena Ryzyk says below. There really are not sufficiently powerful words to describe her, but we link out to those stories that try.  It may be that photography or film offer the best medium for understanding and more fully appreciating her work. Click above for the trailer, or click the title below to read the review of this film, high on our list for viewing:

If you ever meet Jane Goodall and well up with overwhelmed joy, you won’t be alone. “I make everybody cry,” said Dr. Goodall, the primatologist and conservationist. “The Jane effect.”

Tears have indeed been shed at “Jane,” a new documentary about her early life and accomplishments. It’s based on more than 100 hours of footage, shot in the 1960s for National Geographic and hidden in its archives since. The cameraman was Hugo van Lawick, who arrived to document Dr. Goodall’s life among the chimpanzees in Gombe, Tanzania, and left as her husband.

Dr. Goodall, 83, has a dry sense of humor (“You grow from a baby to an old lady, and then you get older, or not, depending on how many face-lifts you have,” she said) and a well-earned warmth. “Can I give you a chimp hug?” she asked at the end of an interview in a Manhattan hotel.

These are excerpts from the conversation.

Now you’re used to attention, but early on, how did you feel about being observed yourself, in the same way you observed chimps?

I knew Geographic sent Hugo out to get what he could of the chimps but also to document me, and I wasn’t happy particularly, but I knew we needed to get that — I needed Geographic funding. So if Hugo wanted to film me washing my hair, so be it. I couldn’t think why on earth anybody wanted to see me washing my hair. It turns out to be one of the most favorite scenes in the film.

The footage is beautifully composed. Were there moments when Hugo said, can you just move a little to the right?

Oh yes, it was nightmarish. I had to eat the same thing five times, redo everything. Luckily, one of the first jobs I had was in a studio in London, in the very old days, doing 35-millimeter stuff for advertisements, and I learned a lot of tricks. And so when these filmmakers say, “That was perfect, can we do it again?” I know why, whereas most scientists get so pissed off.

What was the experience like of watching the film, especially the start of your romance with Hugo and then the dissolution of your marriage?

I actually hadn’t imagined that there could be anything new out of all that footage. So many documentaries have been made about me. “Miss Goodall and the Wild Chimpanzees” [the first one] was so inaccurate. Orson Welles narrated it, and so I got my lawyer, and Orson Welles had to rerecord it.

When I saw this one, it just took me right back to who I was, in a different way. I loved watching the growing closeness between me and Hugo at Gombe, and the happiness of our wedding and birth of our son. And it was healing to suddenly realize, with hindsight, how the end of our marriage was, in a way, inevitable – and for the information we both could share with the world, very important.

You always dreamed of going to Africa to study animals, but initially you had no formal training or scientific background. Did you ever have any impostor syndrome, worrying that you weren’t up to the task?

Not at all. When the chimps were running away, I was terrified the money would run out. I knew if I could have long enough, it would be O.K. I’m an obstinate kind of person, so challenges are to be met…