Before Henry Worsley set off alone, his family painted messages on his skis. “Come back to me safely, my darling,” his wife wrote.
Photograph by Sebastian Copeland

If you have not read it yet, go straight to it. If you have read it already, next you will want to listen to the author, the subject (via field recordings) and the subject’s wife.

We have linked to stories about explorers, though none specifically about Shackleton, in the past. The subject of this story has something important to say about his hero, and it is worth hearing his voice as well as his wife’s (click here).

The author, who we have linked to more than once, gave two excellent interviews about his process as a long-form story-teller, and if this is your thing, then you will want to listen to both, first here and more recently here.

The White Darkness: A Journey Across Antarctica

A solitary journey across Antarctica. 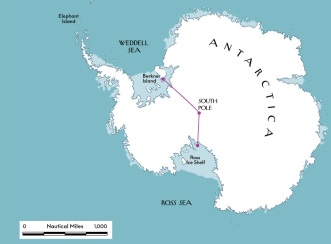 The man felt like a speck in the frozen nothingness. Every direction he turned, he could see ice stretching to the edge of the Earth: white ice and blue ice, glacial-ice tongues and ice wedges. There were no living creatures in sight. Not a bear or even a bird. Nothing but him.

It was hard to breathe, and each time he exhaled the moisture froze on his face: a chandelier of crystals hung from his beard; his eyebrows were encased like preserved specimens; his eyelashes cracked when he blinked. Get wet and you die, he often reminded himself. The temperature was nearly minus forty degrees Fahrenheit, and it felt far colder because of the wind, which sometimes whipped icy particles into a blinding cloud, making him so disoriented that he toppled over, his bones rattling against the ground.

The man, whose name was Henry Worsley, consulted a G.P.S. device to determine precisely where he was. According to his coördinates, he was on the Titan Dome, an ice formation near the South Pole that rises more than ten thousand feet above sea level. Sixty-two days earlier, on November 13, 2015, he’d set out from the coast of Antarctica, hoping to achieve what his hero, Ernest Shackleton, had failed to do a century earlier: to trek on foot from one side of the continent to the other. The journey, which would pass through the South Pole, was more than a thousand miles, and would traverse what is arguably the most brutal environment in the world. And, whereas Shackleton had been part of a large expedition, Worsley, who was fifty-five, was crossing alone and unsupported: no food caches had been deposited along the route to help him forestall starvation, and he had to haul all his provisions on a sled, without the assistance of dogs or a sail. Nobody had attempted this feat before.

Worsley’s sled—which, at the outset, weighed three hundred and twenty-five pounds, nearly double his own weight—was attached to a harness around his waist, and to drag it across the ice he wore cross-country skis and pushed forward with poles in each hand. The trek had begun at nearly sea level, and he’d been ascending with a merciless steadiness, the air thinning and his nose sometimes bleeding from the pressure; a crimson mist colored the snow along his path. When the terrain became too steep, he removed his skis and trudged on foot, his boots fitted with crampons to grip the ice. His eyes scanned the surface for crevasses. One misstep and he’d vanish into a hidden chasm.

Worsley was a retired British Army officer who had served in the Special Air Service, a renowned commando unit. He was also a sculptor, a fierce boxer, a photographer who meticulously documented his travels, a horticulturalist, a collector of rare books and maps and fossils, and an amateur historian who had become a leading authority on Shackleton. On the ice, though, he resembled a beast, hauling and sleeping, hauling and sleeping, as if he were keeping time to some primal rhythm.

He had grown accustomed to the obliterating conditions, overcoming miseries that would’ve broken just about anyone else. He mentally painted images onto the desolate landscape for hours on end, and he summoned memories of his wife, Joanna, his twenty-one-year-old son, Max, and his nineteen-year-old daughter, Alicia. They had scrawled inspiring messages on his skis. One contained the adage “Success is not final, failure is not fatal: it is the courage to continue that counts.” Another, written by Joanna, said, “Come back to me safely, my darling.”

As is true of many adventurers, he seemed to be on an inward quest as much as an outward one—the journey was a way to subject himself to an ultimate test of character. He was also raising money for the Endeavour Fund, a charity for wounded soldiers. A few weeks earlier, Prince William, the Duke of Cambridge, who was the patron of the expedition, had broadcast a message for Worsley that said, “You’re doing a cracking job. Everyone back here is keeping up with what you’re up to, and very proud of everything you’re achieving.”

Worsley’s journey captivated people around the world, including legions of schoolchildren who were following his progress. Each day, after trekking for several hours and burrowing into his tent, he relayed a short audio broadcast about his experiences. (He performed this bit of modern magic by calling, on his satellite phone, a friend in England, who recorded the dispatch and then posted it on Worsley’s Web site.) His voice, cool and unwavering, enthralled listeners. One evening, two weeks into his journey, he said: …