Thanks to Christina Caron for this story that raises important questions about an awesome-sounding technology. Best to first read from The Ocean Cleanup website, and if you have been following the stories we pay attention to you will understand how we might get hooked on the idea:

Ocean currents concentrate plastic in five areas in the world: the subtropical gyres, also known as the world’s “ocean garbage patches”. Once in these patches, the plastic will not go away by itself. The challenge of cleaning up the gyres is the plastic pollution spreads across millions of square kilometers and travels in all directions. Covering this area using vessels and nets would take thousands of years and cost billions of dollars to complete. How can we use these ocean currents to our advantage?

THE IMPACT OF CLEANUP 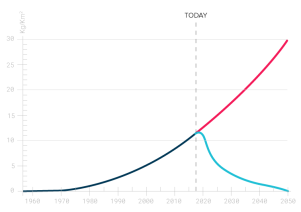 Our models indicate that a full-scale system roll-out could clean up 50% of the Great Pacific Garbage Patch in 5 years.

Research shows the majority of plastic by mass is currently in the larger debris. By removing the plastic while most of it is still large, we prevent it from breaking down into dangerous microplastics.

Combining the cleanup with source reduction on land paves the road towards a plastic free ocean by 2050.

The story in the New York Times raises important questions, not least of which is that Peter Thiel is involved:

…But the ocean can be unpredictable, and simulation models are no guarantee of future performance.

“There’s worry that you can’t remove the plastic without removing marine life at the same time,” said George Leonard, chief scientist at the Ocean Conservancy. “We know from the fishing industry if you put any sort of structure in the open ocean, it acts as a fish-aggregating device.”

It is unclear how well the boom would fare on the open ocean, where it faces high winds, corrosive salt water and other environmental challenges. And then there’s the question of whether it is possible to clean half of the garbage patch in just five years.

“I think the big challenge here is not the long-term goal but the short-term goal,” Mr. Leonard said on Saturday. “Can it remove plastic at all?”

Mr. Slat, the chief executive of Ocean Cleanup, shared the same worry in a video posted on Facebook.

“And to me this is where I think my largest anxiety lies at this point in time,” he said of the system’s ability to collect and retain plastic. “First of all, it’s something that we haven’t really been able to test very well.”

But on Saturday morning, Mr. Slat was decidedly optimistic.

“I’ve definitely never been so confident about the chance of success as I am today,” he said.

Since the start of Ocean Cleanup in 2013, donors have contributed nearly $35 million, Mr. Slat said. Much of that money paid for the boom and helped underwrite research like a study published in the journal Scientific Reports, which quantified the full extent of the garbage patch. Future booms are estimated to cost about $5.8 million each.

Major sponsors include Marc Benioff, the chief executive of Salesforce.com, and Peter Thiel, the co-founder of PayPal…